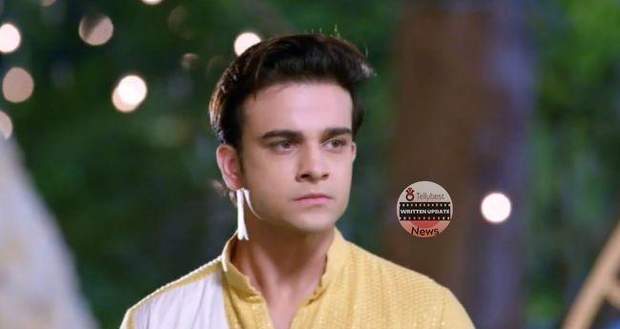 Today's Kumkum Bhagya 26th October 2022 episode starts with Prachi asking Rhea to stop her fake act of being her sister and getting irritated by Rhea’s haphazard moves.

Rhea tells Prachi that she can feel the bond of being a family to Prachi while Alia proceeds toward Prachi from behind.

A flashback shows Alia and Rhea planning their move by bumping into Prachi and exchanging the dupattas for Rhea’s one.

With Prachi wearing the inflammable dupatta, Alia comes toward her with a plate full of diyas so that Prachi’s dupatta catches fire.

However, at the last moment, Neha comes there and takes away Prachi with her for an urgent matter.

Neha tells Prachi that there is nothing between her and Ranbir and that they were only flirting with each other to tease Prachi.

Prachi laughs off the matter and assures Neha that she was just jealous but did not suspect their motives for one moment.

After Neha goes away, Prachi remembers Sahana’s words about Alia’s plan and prays to God to protect them all.

Prachi goes outside to find Sahana and gets engaged in looking after the diyas while Rhea lights up a matchstick to fire up the crackers beside Prachi.

The crackers light up with Prachi stuck in between them and screaming for help.

Ranbir comes running and jumps over the crackers with a shawl to save Prachi from getting hurt.

As the dupatta catches fire, Ranbir snatches it away from Prachi’s body and throws it in the air where it blasts with a bang.

Everyone gets shocked to witness such a scene and end the function then and there.

Ranbir gathers everyone and gets mad over the fact that no one is concerned about how such a conspiracy worked out.

Prachi tells Ranbir not to create a scene as she is all right but Ranbir gets more furious and asks her where the dupatta came from.

Vikram tells everyone that Pallavi was the one who gave the dupatta to Prachi which turns everyone to Pallavi.

At the same time, Rhea goes crazy over the fact that their plan failed and Ranbir saved Prachi by risking his life.

Pallavi comes to Rhea and Alia and asks them to come with her to answer some questions in front of everyone.

After coming back with Alia and Rhea, Pallavi reveals that Alia was the one who brought the dupattas from a temple.

As Ranbir asks Alia about the person who made the dupatta, Rhea gets unconscious distracting everyone from the discussion.