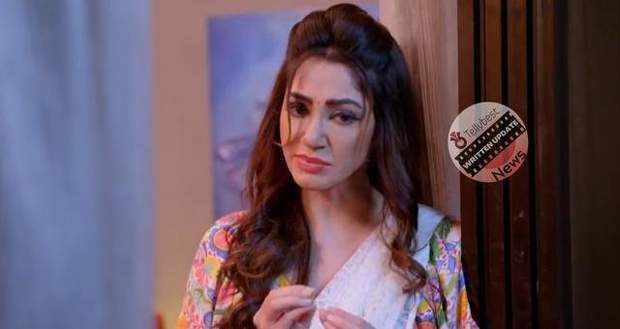 Today's Kumkum Bhagya 26th September 2022 episode starts with Prachi applying medicine to Ranbir’s wounds while their eyes talk with each other delivering the love in their hearts.

Prachi notices a shooting star and tells Ranbir to see it while it still is visible.

Both Prachi and Ranbir wish to go back to the time when they used to be in love with each other without any misunderstandings and knots in their relationship.

Elsewhere, Siddharth also wishes the shooting star to keep Ranbir and Prachi’s love intact throughout the course of their lifetime.

Prachi tells Ranbir that her engagement with Siddharth is on the next day to which Ranbir stumbles in his steps a bit.

However, Ranbir puts up a façade and congratulates Prachi on getting engaged with Siddharth and tells her how her face is showing that she is delighted to do that.

Ranbir questions Prachi if she ever had any feelings for him in her heart hurting Prachi drastically.

Both turn their backs to each other and begin walking further but their souls escape their bodies and intertwine their bodies in search of love.

Meanwhile, Rhea informs Alia about Prachi’s statement about doing the engagement with Siddharth so that she can prove her loyalty to the family.

Alia gets excited about hearing such good news and tells Rhea that Prachi will be out of their lives as soon as she gets married to Sid.

Prachi comes inside with tears in her eyes with Ranbir walking in after her.

Seeing Prachi in tears, Ranbir asks her about the reason to which Prachi denies any answer to him and tells him that she does not need his sympathy.

Prachi rushes inside her room while Ranbir shouts to her to be ready for the engagement the next day.

The next day arrives with the preparations of the engagement at par. Ranbir works with the staff actively to manage things.

Prachi and Siddharth enter along with Aryan and Sahana and get awkward on seeing Ranbir act so casual and active-minded.

Sahana takes Aryan to a corner and asks him to do something but Aryan tells her that despite knowing what the right thing is, Ranbir will continue to act stubbornly.

Grabbing Sahana by her hand, Aryan comes closer to her and tells her that he will start to fall in love with her if she approaches him continuously like that.

Ranbir jokes to Siddharth about preparing Prachi for the engagement by himself, making Prachi gravely offended.

Elsewhere, Alia suggests Rhea dress like Prachi so that Ranbir can replace the image of Prachi with Rhea’s after Prachi leaves.

© Copyright tellybest.com, 2020, 2021. All Rights Reserved. Unauthorized use and/or duplication of any material from tellybest.com without written permission is strictly prohibited.
Cached Saved on: Saturday 1st of October 2022 10:19:24 PMCached Disp on: Thursday 6th of October 2022 04:42:47 PM