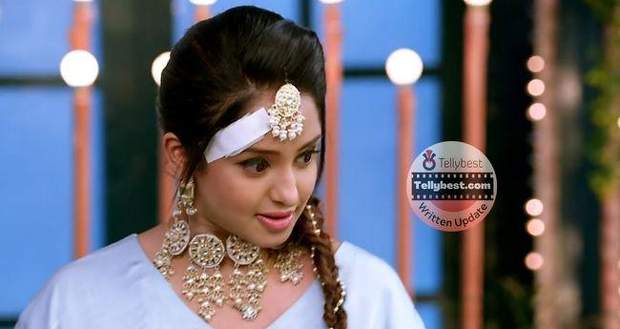 Today's Kumkum Bhagya 27th December 2022 episode starts with Sahana asking Prachi what she intends to do as she refuses to go downstairs to the mandap.

Prachi says that she cannot take such a big risk by sitting at the marriage with Sid as she is pregnant with Ranbir’s child.

Prachi tells Sahana that they must show the family members that she and Sid are getting married even if it's fake.

Sahana gets confused hearing Prachi and thunderstruck as Prachi asks her to sit with Sid at the mandap.

As Sahana hesitates to replace Prachi, Aryan enters with Sid and announces that Sahana will not marry Sid.

Aryan assures Prachi and Sahana that Mihika will be all right which makes them suspicious and they ask him who told him about Mihika.

Prachi assures Sahana and Aryan that she will try her best so that Sahana does not get married to Sid.

Prachi says that even if Sahana gets married to Sid, it will not be a problem as Sid is a good person.

Hearing this, Aryan gets offended and says that Sahana does not like Sid from that angle immediately.

Aryan asks Sid to change clothes with him but Sahana stops him from doing so as it would look too suspicious.

Sid takes Aryan outside with him while Sahana gets ready to sit in place of Prachi.

Meanwhile, Ranbir reaches the hotel room and breaks his way inside in a heroic manner.

The goons attack Ranbir but he beats them mercilessly as he spots Mihika tied up in a chair in the corner.

However, the goons overpower Ranbir and start to tie him up but Ranbir frees himself and snatches the glass bottle that Mihika rolls in his direction.

After locking the goons in the washroom, Ranbir takes Mihika and leaves for the hospital.

The doctor checks Mihika and assures Ranbir that she will come back to her senses in one hour which relieves Ranbir.

Ranbir swears to teach Alia and Rhea a lesson and walks out of the hospital.

At the same time, Rhea notices the hand of the bride and understands that it is not Prachi.

Rhea screams that the marriage cannot happen anymore as it is someone else in place of Prachi.

Alia arrives and supports Rhea while Aryan tries to stretch the time by having an argument with her.

However, as Rhea pulls off the veil, it turns out to be Prachi instead of Sahana who mocks Rhea for her drama.

Pallavi asks Prachi to sit back in her place and get over the marriage while Prachi asks Sid to call their help who has gone to save Mihika.

Ranbir picks up Sid’s call and tells him that Mihika is safe now and in the hospital.

Sid gets up and leaves the mandap to meet Ranbir through the backdoor while everyone stands there with blank faces.

© Copyright tellybest.com, 2022, 2023. All Rights Reserved. Unauthorized use and/or duplication of any material from tellybest.com without written permission is strictly prohibited.
Cached Saved on: Wednesday 25th of January 2023 10:24:54 AMCached Disp on: Thursday 9th of February 2023 05:09:16 AM