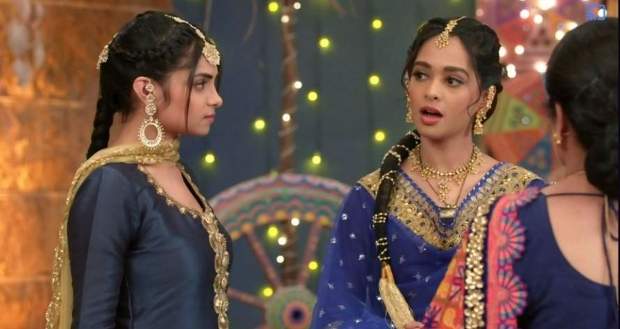 After one round, Ranbeer, Pallavi, and Dida get evicted from the game leaving the finalists as Aaliyah, Rhea, and Prachi.

The final round begins, Prachi tries to sit on the chair but Aaliyah pushes her to make fall on the ground.

However, Ranbeer catches Prachi from falling on the ground, Rhea sees this and gets angry.

Prachi somehow sits on the chair and gets to be the winner of the game, Ranbeer agrees to hug Prachi as the prize.

Feeling pressurized by the crowd cheering for them, Ranbeer and Prachi reluctantly hug each other but soon get lost in euphoria.

Both hug each other tightly trying to feel each other’s warmth at its maximum.

Afterward, Ranbeer and Prachi both reminisce the feelings that they felt while hugging each other, Prachi cries on Sahana’s shoulder after realizing that she still loves Ranbeer like before.

Later, Ranbeer again saves Prachi from falling, Rhea sees this and confronts Prachi accusing her of being shameless for hugging her husband.

Prachi tells Rhea it was only for the game’s sake and has nothing to do with her feelings, she leaves after mocking Rhea savagely.

On hearing Rhea cry because of Prachi, Pallavi advises Rhea to ignore Prachi as she is just a mere past of Ranbeer.

After the musicians arrive, the family members dance together, Ranbeer imagines him and Prachi dancing and enjoying together.

Upcoming Kumkum Bhagya updates: Aaliyah locks Prachi inside a room while Ranbeer does the ritual of "Saath Phere" with Rhea.