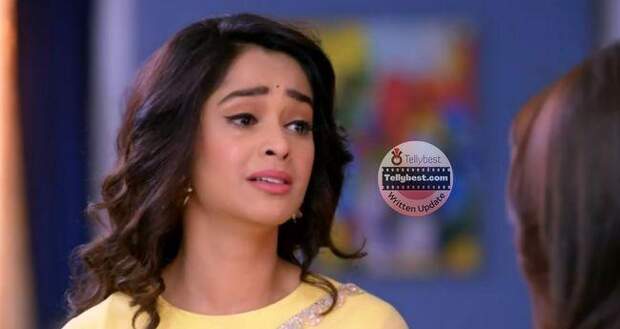 Today's Kumkum Bhagya 27th January 2023 episode starts with Prachi ordering coffee while Ranbir wanders off, looking for her as he feels Prachi’s presence.

The man at the counter calls Ranbir for his coffee while Prachi sits on the opposite seat turning her back toward Ranbir.

Both Ranbir and Prachi sit, their backs facing each other and enjoying their coffee when suddenly Ranbir mistakenly takes Prachi’s cup.

After taking a sip from it, Ranbir feels something weird and gets shocked to see a lipstick mark on the cup.

Ranbir silently keeps Prachi’s cup where it was while she is busy with her phone and decides to leave after finishing his coffee.

After Ranbir leaves, Prachi drinks from that same cup and feels something different about that coffee as if a weird feeling is lingering in it.

Ranbir comes running and spots Kaya waiting for him with her luggage at the luggage corner.

Kaya walks toward Ranbir and asks him if he is Ranbir Kohli, the manager to which Ranbir nods his head.

Ranbir says hello to Kaya while she tells him that she hates people who do not value time as her time is precious.

Kaya asks Ranbir to follow her but Ranbir asks her why she is not taking her luggage.

Kaya asks Ranbir if he is dumb as he is the one who needs to carry those as the manager who is receiving the daughter of their biggest client.

Ranbir regrets coming there as Kaya is nothing like her father told him, but the complete opposite of that.

As Ranbir takes the two trollies, he notices the name tag of “Prachi Aurora” on one of them and gets happy.

Ranbir says that his Prachi is back as he has continuously felt that she is near him.

Aryan asks Ranbir to leave the airport together while Ranbir hugs him and says that Prachi has returned and is somewhere here.

Ranbir searches for Prachi crazily while Prachi goes to bring a trolly for her luggage with which Priya is waiting.

Both of them miss each other in the crowd but Ranbir feels Prachi’s saree sliding over his face and recalls the past moments between him and Prachi.

Ranbir calls Prachi’s name which makes Prachi stop in her tracks and turn around only to be blocked by a cart of luggage moving between her and Ranbir.

As soon as the cart moves away, Ranbir gets distracted by Kaya while Prachi helps a child who bumps into her.

Kaya asks Ranbir to stop spacing out as she is getting late but Ranbir ignores her and rushes to the lost and found section to look for Prachi.

Kaya says that no one has ever ignored her the way Ranbir angrily.

While going to the lost and found section, Kaya bumps into Prachi and their phones get exchanged by mistake as they look similar.

Aryan finds Ranbir running around and tells him that Prachi is dead as they did her funeral 6 years ago but Ranbir refuses to believe it.

Ranbir says that the day Prachi went away from him is the worst day of his life but now Prachi is back as he can feel it.

Vikram calls Aryan as he lands at the airport and asks him to come to him so that they can leave together.

Prachi gets shaken out of her thoughts by Priya and she says that she heard a very familiar voice.

However, as Priya asks Prachi if that person is very close to her, Prachi refuses to accept Ranbir as someone close to her.

© Copyright tellybest.com, 2022, 2023. All Rights Reserved. Unauthorized use and/or duplication of any material from tellybest.com without written permission is strictly prohibited.
Cached Saved on: Saturday 28th of January 2023 12:00:08 AMCached Disp on: Thursday 2nd of February 2023 07:18:02 PM