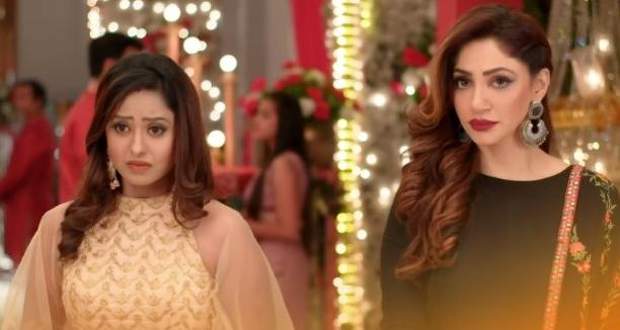 Today's Kumkum Bhagya 27th July 2022 episode starts with Sahana coming back to the function and informing everyone about Aryan’s arrival.

Aryan enters with his suitcase and greets Ranbir the moment they see each other.

In the attempt to hug each other, Ranbir and Aryan run toward each other but slip on the floor and crash on their backs.

Everyone breaks into laughter seeing the two men while they dance together after hugging each other.

Aryan congratulates both Ranbir and Prachi on becoming parents and teases Ranbir on hitting a sixer in his romantic life.

After Millie enters, Aryan introduces her to everyone as his girlfriend.

Meanwhile, Pallavi scolds Rhea mercilessly for acting like a spoiled child and asks her to grow up a little for once.

Pallavi tells Rhea to stop crying at little things and see the future that Pallavi is trying to plan for her.

However, Rhea asks Pallavi why she is celebrating Prachi’s pregnancy with such a grand function and blessing her child.

Pallavi adds that she has called all the minor guests at the function whereas, in Rhea’s case, all the important guests were present.

When Rhea asks Pallavi about her statement regarding uniting Ranbir and Prachi with each other, Pallavi says that she is doing so because she wants Prachi to trust Ranbir.

Pallavi explains to Rhea that in order to keep Prachi in the house, they need to make Prachi rely on Ranbir.

While Pallavi asks Rhea not to spoil her plan, Vikram appears at the door and asks Pallavi how she can make a plan by herself.

Elsewhere, Ranbir tells Aryan about his whole situation regarding Prachi and Rhea and asks Aryan to help him in settling things.

Aryan spots Sahana greeting Stanley with a smile and seems curious to know if she and he are in a relationship.

After Aryan tells Ranbir about the circumstances under which he left home, Ranbir assures Aryan that Alia will forgive him soon.

At the same time, Pallavi, Alia, and Rhea feel relieved after confirming that Vikram has not heard anything and tries to distract him.

Ranbir accompanies Prachi while she goes into the washroom and shows his care by helping her to arrange her saree plates.

Rhea, Pallavi, and others see the whole scene and Rhea walks away after seeing Pallavi adoring Prachi.

After coming back to the function, Dida’s friend touches both Prachi and Rhea’s wrists and understands something which Pallavi notices.

Alia spots Aryan and goes back inside without talking to him. So, Ranbir decides to make them patch up.