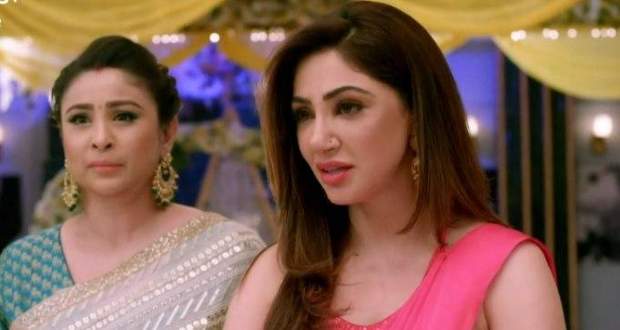 Rhea reveals that on that night she witnessed a big fight between Prachi and Ranbir in which Ranbir was pushed out of the room by Prachi.

Drowning himself in the sorrow of being rejected by Prachi, Ranbir began to drink and was struggling to handle himself when Rhea rushed to hold him.

Rhea tried to embrace Ranbir by confessing her love for him but Ranbir rejected her and blamed her for ruining his relationship with Prachi.

However, soon after, Ranbir began to hallucinate and saw Prachi in Rhea’s place which made him go soft toward Rhea.

Rhea took the chance and played the role of Prachi to drunk Ranbir and made him believe that Prachi is with him.

Back to the present, Rhea tells Alia that’s how she got intimate with Ranbir which resulted in her pregnancy.

Alia bursts into anger on hearing Rhea and tells her that Ranbir will never accept her baby because his whole existence is in love with Prachi.

Rhea confidently boasts that she does not want Ranbir to love her and is satisfied with his genes inside her body.

Hearing that, Alia lands a tight slap on Rhea’s face and asks her to stop acting like a pathetic woman.

Just then, Rhea feels nauseous and rushes into the washroom with Alia helping her with the vomiting.

Pallavi comes and takes Alia and Rhea back to the party where a woman asks about Prachi as Ranbir’s wife.

Rhea takes this opportunity to overreact in front of Pallavi and sheds tears so that Pallavi feels guilty.

Pallavi promises Rhea that she will give Rhea her rights by throwing Prachi out of the house.

Meanwhile, Ranbir comes into the apartment and finds Prachi crying on the floor.

Ranbir sits behind Prachi and hears her crying in silence while having a flashback of his promise to Prachi of always staying with her.

After remembering his promise, Ranbir decides to always stay with Prachi and his child as a happy family no matter what Rhea plans.

Prachi shakes away Ranbir’s hand as he tries to hug Prachi and asks him to stay away from her.

Even though Prachi resists Ranbir from touching her, Ranbir engulfs her in a hug and stands still.

However, Prachi soon pushes him away and leaves the apartment with Ranbir running after her.

© Copyright tellybest.com, 2022, 2023. All Rights Reserved. Unauthorized use and/or duplication of any material from tellybest.com without written permission is strictly prohibited.
Cached Saved on: Monday 21st of November 2022 08:37:50 PMCached Disp on: Monday 5th of December 2022 01:04:50 PM