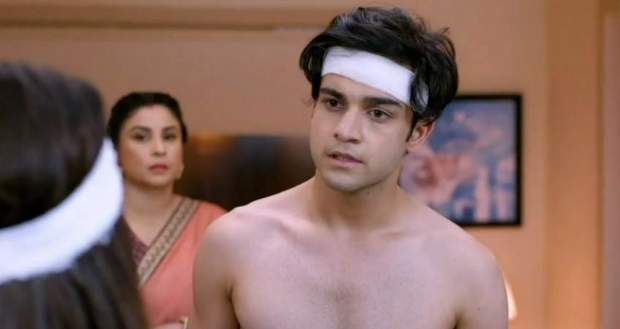 Today's Kumkum Bhagya 27th May 2022 episode starts with Sahana coming to Prachi and asking her how she got into an accident.

Prachi asks Sahana to calm down and assures her that she is fine now and doing better.

After Prachi tells Sahana that it was Rhea who saved her, Sahana refuses to believe in Prachi and doubts Rhea’s intentions.

Prachi tells Sahana about Rhea’s confession about wanting Prachi dead and snatching Ranbir from her at any cost.

The nurse comes and takes Prachi for her pregnancy checkup to another room.

Ranbir spots Prachi going into the doctor’s room with the nurse and decides to surprise her with the rose.

Pallavi calls Rhea and asks her to visit Ranbir at the hospital and not let him escape her eyesight for one moment.

Rhea asks for the reason for such a decision and tells Pallavi that her health is not in good condition.

However, Pallavi explains the situation of Ranbir and Prachi together and convinces Rhea to instantly go to the hospital.

On the other hand, Ranbir pushes the door to enter the room when he hears the doctor telling Prachi that her baby is fine.

The doctor makes Prachi hear her baby’s heartbeat which Ranbir also hears from the entrance.

Such a sudden revelation shakes Ranbir from his core and he instantly runs away from the room.

Ranbir gets extremely angry with Prachi for hiding the truth from him as he has the right to know about him becoming a father.

At the same time, Ranbir rejoices that he is going to become a father and shouts in celebration of the happy news.

After rejoicing, Ranbir decides to confront Prachi and finds her resting in her room.

Ranbir tells Prachi that he will never forgive Prachi for not telling him about her pregnancy although she knows it was his dream to become a father.

However, soon Ranbir calms down and promises Prachi that he will take absolute care of her and their child from now on.