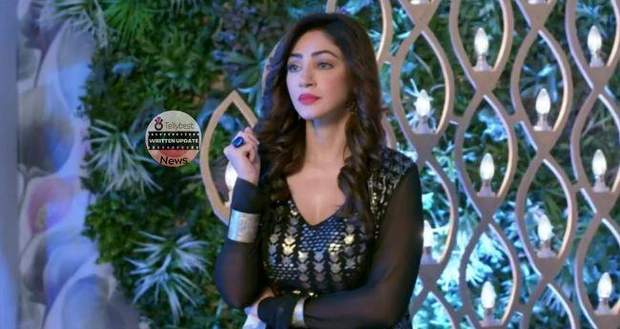 Today's Kumkum Bhagya 27th October 2022 episode starts with Alia laying Rhea on the bed with the help of Aryan and losing her temper in panic.

Aryan proceeds to call the doctor but Alia snatches his phone, scolds him, and throws him out of the room.

Sid says that he wants to meet Mihika which angers Alia even more and she pushes him out of the room locking the door.

Rhea wakes up and Alia thanks her for saving her from the intense interrogation.

However, Alia worries about how she will answer the questions about the dupatta and discusses a plan with Rhea.

Suddenly, Pallavi comes into the room and sees Rhea standing with Alia.

Alia tells Pallavi that Rhea is fine now but Pallavi takes Rhea with her to feed her something.

Meanwhile, Prachi tries to talk with Ranbir but Ranbir refuses as he knows what Prachi will insist on him.

Ranbir asks Prachi why she is acting so softly to which Prachi answers that it is her way of thanking him.

However, Ranbir’s mood changes drastically as he starts to scold Prachi for not being careful.

As Pallavi and Rhea return to the living room, Dida says that Alia is acting strangely according to Aryan.

Aryan says that Alia has never talked so rudely to him but Rhea starts to argue with him on the matter.

Rhea says that Alia just threw Aryan out of the room while Sid asks Rhea how she knows if she was unconscious.

Rhea replies that Alia told her while Alia, Ranbir, and Prachi arrive in the living room.

As Ranbir asks about the dupatta, Alia shows a pink dupatta in a bag and says that the dupatta she brought did not reach Prachi.

A flashback shows Alia finding a similar dupatta and deciding to present it as the one she brought for Prachi.

Just then, the police arrive and the policewoman introduces herself as Inspector Yamini Singh.

Ranbir tells inspector Yamini about the whole incident from which she concludes that it is an attempt-to-murder case.

Inspector Yamini announces that she will investigate each family member in private so that their statements remain anonymous.

Asking Vikram and Dida to come first, Inspector Yamini starts her questioning while Alia and Rhea get nervous.

© Copyright tellybest.com, 2022, 2023. All Rights Reserved. Unauthorized use and/or duplication of any material from tellybest.com without written permission is strictly prohibited.
Cached Saved on: Monday 21st of November 2022 05:18:35 AMCached Disp on: Friday 9th of December 2022 05:44:33 AM