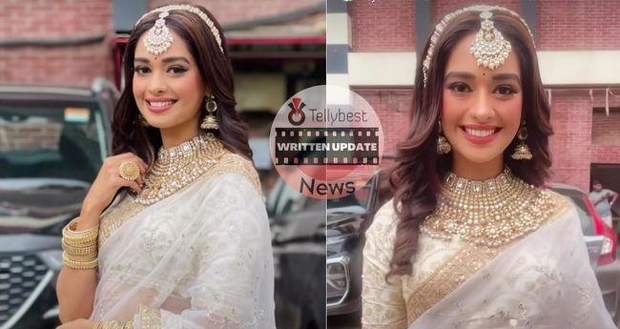 Today's Kumkum Bhagya 27th September 2022 episode starts with Prachi staring out the window and thinking about Ranbir’s words regarding her engagement with Sid.

At the same time, Pallavi enters Prachi’s room to give Prachi a necklace to wear to the engagement.

Pallavi even adds in a calm voice that neither Sid’s mom nor Prachi’s mom is here so she should think of her as a mom and trust her decision.

However, before leaving, Pallavi again turns and orders Prachi not to make any drama before the engagement and Prachi nods in agreement.

After Pallavi leaves, Prachi sits near the edge of the bed and breaks down in tears.

At the same time, Ranbir enters the room and urges Prachi to get up.

Once Prachi stands up, Ranbir urges Prachi not to get engaged with Sid as he cannot see her with any other man.

Before Prachi can say anything, a black hooded guy comes out of nowhere and throws kerosene at Ranbir.

While Prachi urges Ranbir to open his shirt, the black hooded guy lights up a matchstick and sets Ranbir on fire.

However, Prachi quickly comes out of her dream with a scream and decides to stay away from Ranbir.

Later while Ranbir is trying to start the oven, Prachi comes out of nowhere and pushes Ranbir away before he can start the gas.

Seeing the sudden fire, Ranbir asks Prachi how she knew about it.

Prachi replies that she saw a dream and hugs Ranbir tightly with her heart filled with concern.

While Prachi looks at Ranbir with shock, Ranbir walks away from there.

Later in his room, Ranbir starts feeling helpless as he cannot do anything to stay with Prachi.

On the other hand, Alia enters Pallavi’s room and compliments Pallavi on her attire.

Seeing Alia, Pallavi starts telling how she started liking Prachi after learning about her pregnancy but now she hates her again.

Hearing this, Alia breathes a sigh of relief and urges Pallavi not to think about it much.

Elsewhere, Prachi takes out the saree Ranbir gifted her and starts recalling her sweet memories with him.

With a heavy heart, Prachi starts getting ready for the engagement.

Ranbir enters the room and starts preparing Prachi for the engagement and stares at their reflection with tears in their eyes.

© Copyright tellybest.com, 2020, 2021. All Rights Reserved. Unauthorized use and/or duplication of any material from tellybest.com without written permission is strictly prohibited.
Cached Saved on: Saturday 1st of October 2022 10:09:13 PMCached Disp on: Sunday 2nd of October 2022 01:00:58 PM