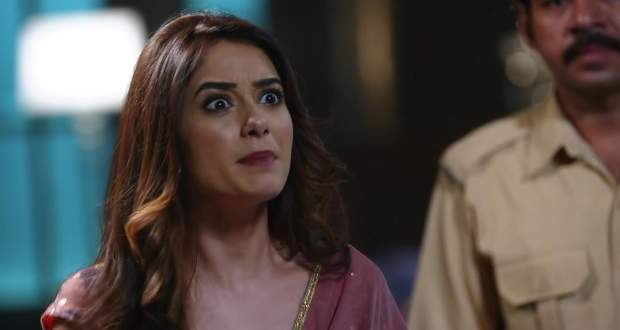 Today's Kumkum Bhagya 28 April 2021 episode starts with Prachi and Ranbir trying to open the drawer and the security alarm rings.

They switch off the fuse and again switch on the fuse so that the security alarm does not ring.

Raghuvir Mishra refuses to fight the case while Pragya reveals that Tanu has confessed in front of her that she has filed a fake case to take revenge.

He agrees to take the case and tells her to collect all the evidence she has.

Meanwhile, Prachi and Ranbir find Abhi's pics and pendrive in a drawer.

Ranbir and Prachi check the pendrive to see Tanu talking to Abhi while suddenly Tanu comes there with Inspector and accuses them of trespassing.

Tanu gets both of them arrested while Tanu checks the video and gets relieved that they didn't see the full video.

Pragya scolds Prachi while Ranbir informs her that they saw the original video there and that the video Tanu will show in court will be the edited video.

© Copyright tellybest.com, 2020, 2021. All Rights Reserved. Unauthorized use and/or duplication of any material from tellybest.com without written permission is strictly prohibited.
Cached Saved on: Tuesday 30th of November 2021 08:16:30 PMCached Disp on: Wednesday 1st of December 2021 03:20:27 PM