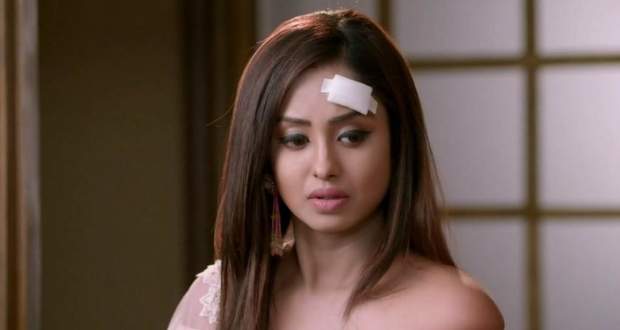 Today's Kumkum Bhagya 28th April 2022 episode starts with Rhea asking Prachi to get out of the room as she is taking care of Ranbir well even without Prachi’s interference.

Prachi deliberately refuses to leave that room and tells Rhea to step back as she will not give up on Ranbir anytime soon.

However, as Rhea shows Prachi that the room belongs to her and Ranbir, Prachi leaves after warning Rhea that she will come back.

Prachi worries about Rhea’s words and feels pain in her stomach as she stresses about Ranbir’s condition.

Meanwhile, Ranbir wakes up and sees Rhea there who says that she was applying the ayurvedic paste that she made.

Ranbir asks for Prachi and gets a bit upset when Rhea tells him that she is sleeping in her room.

Soon after, Ranbir walks into Prachi’s room where she was sleeping after taking her medicines.

Ranbir gets a bit sentimental on seeing Prachi peacefully sleeping but leaves that room without talking or touching Prachi.

Prachi sees Ranbir’s silhouette through her hazy vision and tries to call him but due to the medicines' effect, sits down as she feels dizzy.

Meanwhile, Rhea and Aaliyah intentionally converse about Prachi and her plan to portray herself as the victim while harming Rhea at the same time.

However, Ranbir interrupts them and makes it clear that Prachi is not the culprit as she does not care about him.

Feeling dejected, Rhea leaves with Aaliyah and tells her that she will portray Prachi as the culprit in Ranbir’s eyes.

Later, Prachi wakes up and goes into Rhea’s room where she encounters Ranbir.

Prachi takes out all her clothes and belongings of Rhea and throws them out of the room while Ranbir asks what she is trying to do.

Hearing the noise, Rhea and Aaliyah appears in the doorway and furiously ask Prachi what she was doing.

Prachi announces that she is reclaiming her rights as the legal wife of Ranbir and closes the door in Rhea’s face.

© Copyright tellybest.com, 2020, 2021. All Rights Reserved. Unauthorized use and/or duplication of any material from tellybest.com without written permission is strictly prohibited.
Cached Saved on: Monday 3rd of October 2022 08:43:45 PM