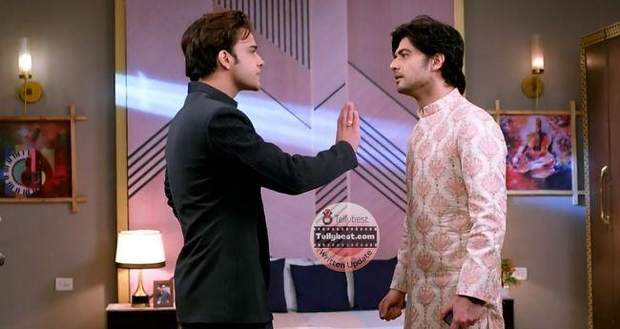 Today's Kumkum Bhagya 28th December 2022 episode starts with Ranbir meeting Sid outside the house and telling him that they should expose Alia and Rhea now as they have Mihika safe.

Siddharth asks Ranbir not to reveal anything yet which frustrates Ranbir and he asks Sid why they cannot do anything about Mihika.

Ranbir tells Prachi that he has many pent-up things to tell her as to why she hid such a big thing from him.

Prachi says Ranbir should not have such an attitude after committing a mistake that shocks him.

Ranbir asks Prachi what his mistake is to which Prachi says that he should have trusted Prachi from the beginning.

Instead, Ranbir asked her to marry Sid at once when the proposal was raised.

Ranbir says that he was not aware of such a big truth being hidden from him and asks Prachi why she did not bother to inform him.

Prachi says that Ranbir is supposed to know her heart without expressing it in words which makes Ranbir more frustrated.

Ranbir says that Prachi should have given him a hint at least to which Prachi replies that those things would not be necessary if he trusted her.

Sid stands confused between them and decides to go inside but returns after seeing a photo.

Ranbir sees the photo of two goons sitting by Mihika’s bed and rushes inside to confront Alia and Rhea.

Ranbir announces that playtime is over and it’s time to reveal the secrets of the people who have been planning evil things the whole time.

Seeing Alia thinking, Ranbir says that he is aware of their plan and how they have attempted kidnapping and torturing.

Ranbir snatches away Alia’s phone while Sid does the same with Rhea and tells them that no drama is needed anymore.

Ranbir asks Prachi to tell everyone what they did to her as she is the main victim.

Sahana also comes out and encourages Prachi to reveal everything about Alia-Rhea’s plan as she has Ranbir by her side now.

As Prachi hesitates to utter anything, Ranbir says that he is telling everyone where everything started.

Ranbir says how Alia-Rhea kidnapped Mihika and forced Sid and Prachi to marry each other or else they would kill Mihika.

Rhea denies Ranbir’s allegations and takes a knife saying that she will slash her wrist if Ranbir says anything further.

Ranbir asks Rhea to go ahead and says that he hates her for her evilness and character.

Rhea slashes her wrist and lands on Prachi’s lap smiling like a psychopath.

Alia blames Ranbir for Rhea’s condition and proceeds to call the police to get him arrested.

Rhea laughs at Prachi and says that even after she dies, she will not let Prachi and Ranbir unite with each other.

Prachi wakes up from her imagination and stops Ranbir from going inside.

Instead, Prachi asks Ranbir to bring Mihika and Rhea’s DNA reports with him so that they can accuse them with evidence.

After Sid promises Ranbir that he will not let the marriage happen, Ranbir leaves for the hospital.

However, Ranbir calls Sid and asks him to meet him at the other side of the house.

Ranbir gives Sid Mihika’s details and asks him to save his sister while he sits in the marriage with Prachi.

Sid leaves for the hospital while Ranbir comes to the mandap posing as Sid.

However, Ranbir gets shocked to see Sahana sitting beside her while Sahana says that she is fine with her being married to him.

Ranbir asks Sahana to go and call Prachi but does not tell her that he is the one sitting as Sid.

Sid reaches the hospital and checks on Mihika while the goons leave the room to get some fresh air.

Sahana enters with Prachi under the veil while Prachi tries to coin out a plan so that she can stop the marriage.

© Copyright tellybest.com, 2022, 2023. All Rights Reserved. Unauthorized use and/or duplication of any material from tellybest.com without written permission is strictly prohibited.
Cached Saved on: Wednesday 25th of January 2023 01:05:54 PMCached Disp on: Thursday 9th of February 2023 05:27:26 AM