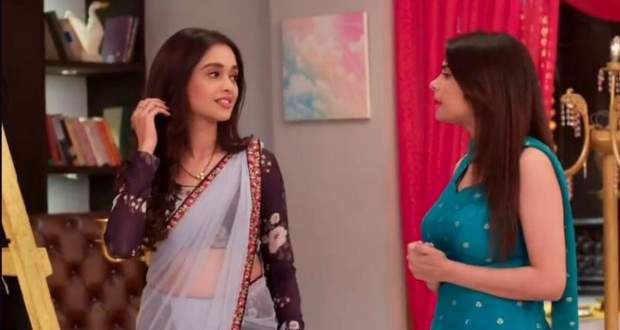 Today's Kumkum Bhagya 28th February 2022 episode starts with Prachi and Ranbeer busy with the preparations of the anniversary party of Pallavi and Vikram.

With Ranbir glancing at Prachi, she catches him looking at her.

Ranbir avoids the embarrassment of getting caught and pretends to talk on the phone.

While he is talking he slips and falls into Prachi's arms.

Prachi and Ranbir continue their quarrel.

Meanwhile, Pallavi and Vikram seem impressed by the decorations.

Ranbir and Prachi congratulate the couple on their anniversary.

On watching the love between the family, Aaliyah walks away snobbishly and says she can't handle the sweetness.

Rhea shares her plan about exposing Prachi with Aaliah while she calls a doctor to come over to their place.

Later on, Rhea plans to add a chemical powder into Prachi’s juice and expose Prachi.

She discusses how Prachi’s child has proved to be lucky for her and gave her an opportunity to expose Prachi's truth.

Aaliyah helps Rhea to execute the plan effectively by distracting the house staff who was bringing juice for Prachi.

Meanwhile, Sahana teases Prachi about how she is noticing the changes in Prachi's relationship with Ranbir which she denies.

Sahana says that's good news for her as she likes Ranbir and can start to plan their future together.

Sahana notices Prachi’s jealousy and says Prachi should accept her feelings for Ranbir.

Meanwhile, Rhea’s plan seems to get successful as Prachi gets unconscious.

Aaliyah blames Sahana for her careless behavior to which Sahana asks her why she is worried about Prachi all of a sudden.

Rhea’s doctor reveals to Rhea that Prachi might be pregnant and suggests doing a blood test to confirm.

The doctor reveals that reports will be available tomorrow. At Aaliyah's and Rhea's request the doctor agrees to send the reports by night.

Rhea and Aaliyah prepare for their revenge while they leave for NGO.

Meanwhile, in Prachi's room, Ranbir expresses his concern for Prachi and tells her to rest.

Prachi doubts Rhea's and Aaliyah's concern for her.