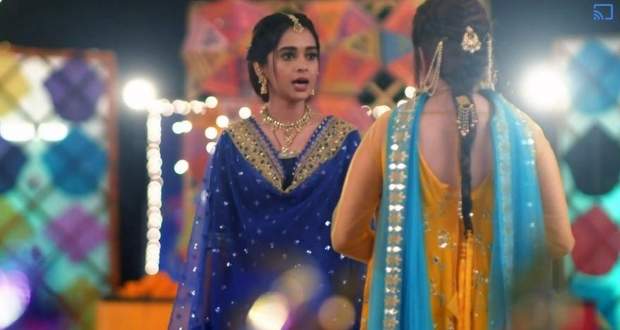 Rhea watches Ranbeer and Prachi dance together and leaves from there in anger, Aaliyah stops her and convinces her to stay there.

Rhea bursts out in anger exclaiming that nothing is going on good for her while Prachi is experiencing all the happiness.

Interrupting Rhea’s words, Pallavi comes and calls her to join them for the puja of Lohri.

Aaliyah thinks of something so that Rhea can comfortably do the puja and ritual with Ranbeer without Prachi interrupting.

She acts like Dida wants her glasses urgently in front of Prachi; Prachi goes inside to fetch Dida’s glasses with Aaliyah following her.

Meanwhile, the puja starts, Dida hands over the responsibility of a mother-in-law to Pallavi and asks her to start the puja with Vikram.

They inaugurate the puja and do the revolutions around the fire; the other guests also proceed with the puja.

At the same time, Aaliyah locks the door while Prachi searches for the glasses in the room and returns sneakily.

On the other hand, Ranbeer tries to leave to search for Prachi but gets stopped by Pallavi as he has to do the puja with Rhea.

Seeing Prachi absent, Sahana searches for her and finally finds her locked inside the room.

As Prachi arrives at the puja spot, she sees Ranbeer and Rhea doing “saath phera” around the Lohri fire.

Dida sends her to do the puja along with them despite Pallavi resisting that idea.

Prachi joins Ranbeer and Rhea and three of them start to encircle the fire continuing the puja, Rhea pushes a burning wood in front of Prachi, and Prachi’s foot gets burnt.

Ranbeer hurries to help her in walking and supports her while they complete the rotations together.

Then he carries Prachi in his arms and takes her inside to treat her wound leaving Rhea raging in anger.

KKB Precap: Both Prachi and Ranbeer fix appointments with the same doctor at the same time. Prachi feels distressed about the pain in her stomach due to pregnancy.