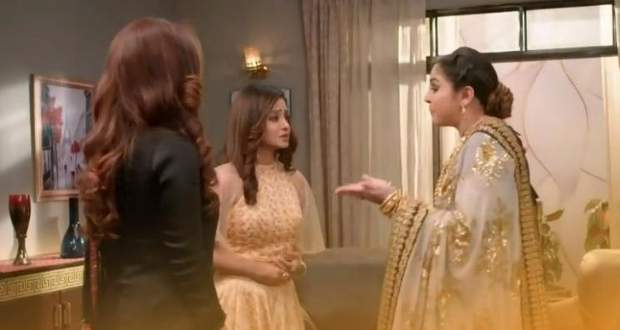 Today's Kumkum Bhagya 28th July 2022 episode starts with Ranbir and Aryan coming after Alia and playing a skit to patch up Aryan and Alia’s relationship.

Ranbir pretends to be beaten up after he says that Alia is a mad woman and begins to blame Aryan for slapping him.

Not being able to understand what Ranbir is trying to do, Aryan asks him to stop as Alia is getting angrier due to his words.

However, Alia comes to Aryan and takes his side in front of Ranbir and asks him to stay out of that mother-son matter.

Alia tells Aryan that no matter how much she remains angry with him, at the end of the day, Aryan is her son and she loves him.

Aryan shares a loving hug with Alia and thanks Ranbir through signals when Sahana comes and asks Aryan to introduce Alia to his girlfriend.

Alia becomes curious and goes back to the function to meet Aryan’s girlfriend but Aryan stops Sahana and begins to fight with her.

After stomping on Aryan’s foot and freeing herself, Sahana says that she is not weak and needs others’ help to free herself.

Ranbir asks Aryan to stop worrying about things and goes back to the living room where the function of godh-bharai is going on.

Everyone in the family comes forward and gifts something to Prachi as their blessing and wishes a happy and healthy pregnancy to Prachi.

Seeing Parineet going off inside, Pallavi follows her and catches her drinking in her room.

Pallavi asks Parineet what she felt when she touched Prachi’s hand to which Parineet replies that Prachi’s child will be the good luck charm of the family.

However, Parineet says that she did not feel anything after touching Rhea’s hand and tells Pallavi that Rhea’s child will bring bad luck to the family.

Later, Ranbir gifts Prachi a picture of them together and promises to keep her smiling like she is doing in that picture.

On Rhea’s turn to gift Prachi something, Rhea puts on a sour face and whispers in Prachi’s ears that she wishes her child to be born dead.

Prachi gets up in anger and pushes Rhea to the floor which surprises everyone.

On asking Prachi the reason, Prachi tells everyone that Rhea wished for her child to be born dead and lets everyone know how she always wanted bad for Prachi.

Rhea loses her cool and shouts that no one cares about her baby and only shows love to Prachi. That’s why she wants both Prachi and her baby to die at that instant.

Ranbir asks Rhea to behave herself but Prachi says that she is scared of Rhea and will leave the house if Rhea lives with them.

Stopping Prachi from leaving, Pallavi and Ranbir command Rhea to leave the house which she refuses to follow.

Blinded by anger, Rhea takes a knife and tries to attack Prachi but Ranbir stops her at the last moment.

Ranbir says that he would kill Rhea if she was not pregnant and throws her out of the house.

© Copyright tellybest.com, 2022, 2023. All Rights Reserved. Unauthorized use and/or duplication of any material from tellybest.com without written permission is strictly prohibited.
Cached Saved on: Monday 21st of November 2022 12:48:46 AMCached Disp on: Saturday 3rd of December 2022 02:39:30 PM