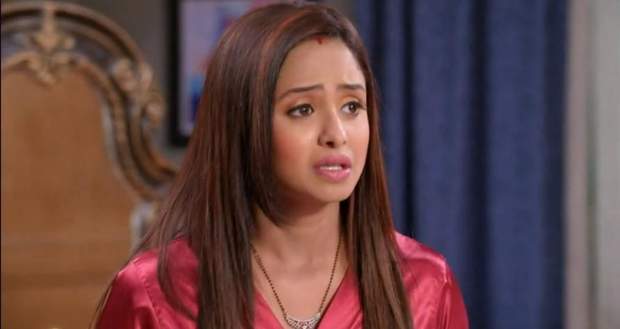 Today's Kumkum Bhagya 28th March 2022 episode starts with Ranbir telling Prachi that he wants to make Prachi his own.

He also tells her that he likes her being jealous and it makes him feel loved.

Although, Prachi is getting affected by Ranbir’s words, however, she controls herself.

Afterwards, Ranbir tells Prachi that he is not asking her to love him back but only wishes to love her and Prachi cannot take that away from him.

Getting emotional, Ranbir warns Prachi that only his death will make him stop loving her.

Meanwhile, Rhea asks Ranbir to spend time together while Ranbir stops her from behaving like a wife as no one is watching them.

He also tells Rhea that there could be nothing between them however, Rhea is not ready to back down.

Ranbir denies being a partner with her anymore and leaves while thinking of Prachi.

In the kitchen, Prachi is thinking about Ranbir and his confession of love.

Just then, Sahana comes in questioning her about her thoughts.

Prachi is annoyed at Ranbir and calls him a liar and a betrayer.

Sahana favours Ranbir for being honest in his relationship and tries to convince Prachi for seeing his good and true side.

She also tells Prachi that she will not let Prachi stay in ignorance for long and will do everything in her power to see the truth.

Meanwhile, Rhea mocks Prachi and tries to instigate Prachi while emphasising to her that Ranbir is her husband.

Prachi gives in to her anger and tells Rhea that she knows her truth and also knows about spiking Ranbir’s drink that allowed her to take advantage of the situation.

While Rhea acts innocent, Sahana also joins the conversation and tells Rhea that she has proof which will soon come out in front of others as well.

Afterwards, Prachi scolds Sahana for making her feel things for Ranbir again which has complicated her life.

She also tells her that her anger for Ranbir is because he has made her share her Kumkum with Rhea and then he was under no pressure.

Prachi tells Sahana that her doubts will soon be cleared either by Ranbir or by Rhea.