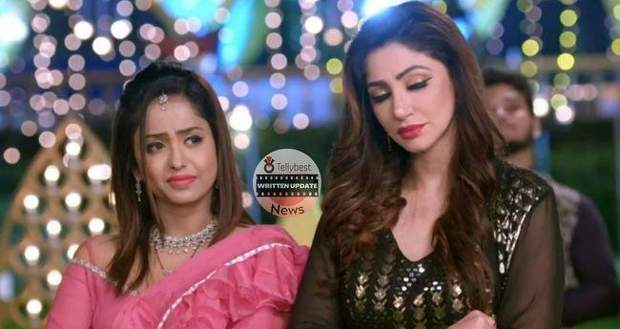 Today's Kumkum Bhagya 28th October 2022 episode starts with Dida and Vikram waiting for inspector Yamini to question them about the incident.

Inspector Yamini asks Vikram and Dida if they love Prachi to which both answer with an immediate yes.

Dida says Prachi is extremely sweet and loves her wholeheartedly with Vikram agreeing to it.

Inspector Yamini remarks how someone has tried to kill Prachi in a place where people love her so much.

After Dida and Vikram come out, Sid goes in to answer the questions of inspector Yamini.

Meanwhile, Prachi and Ranbir continue to bicker with each other and Prachi tells Ranbir that he was wrong to act so aggressively.

Ranbir asks Prachi to take care of herself and leaves after taunting Prachi to be too naïve.

Sid tells inspector Yamini that he cares for Prachi from his heart which the police believe.

Yamini asks Sid if there are any enemies of Prachi in the family to which Sid answers that even though Rhea and Prachi have a sour relationship, still they love each other.

After hearing Sid, Yamini asks him to leave and calls Alia and Rhea inside.

At the same time, Sahana notices Aryan in distress and asks him about the problem.

Aryan hesitates to tell Sahana about his problem as it is related to his girlfriend Millie and runs away saying that he will tell her later.

All the family members discuss the questions inspector Yamini is asking but Dida forbids Vikram from saying anything.

Sid comes and asks Rhea and Alia to go inside as it is their turn to answer the questions.

After Rhea and Alia come to inspector Yamini, she asks them who among them loves Prachi the most.

Rhea answers that it is her as she is Prachi’s blood-related sister with Alia supporting her by saying that even though they fight, they love each other.

Alia says that she has seen Prachi since childhood and loves her as her aunt, but Prachi thinks she favors Rhea over her.

After Alia and Rhea come out, they blame Prachi for making so many enemies but Dida and Sahana defend her by saying that evil is always after good.

Inspector Yamini interrupts their family drama and asks Alia to hand over her phone and checks it.

On spotting the tailor’s number, inspector Yamini calls him and asks him to come to the Kohli mansion as soon as possible.