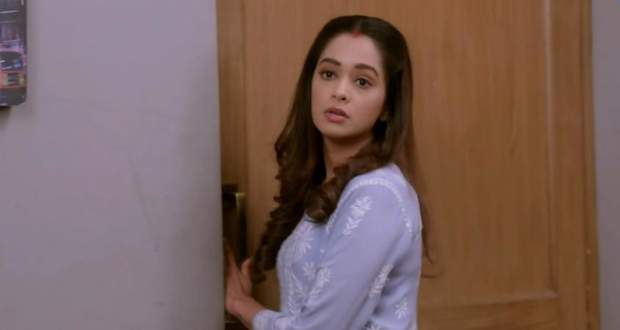 Today's Kumkum Bhagya 29th April 2022 episode starts with Ranbir asking Prachi what she is doing with Rhea’s things and why did she throw them out of the room.

Prachi makes Ranbir lie on the bed and answers that she is going to shift in that room so eventually Rhea has to leave.

Hearing Prachi, Ranbir asks her not to tell him to shift to another room in this condition as it is hard for him to move around.

Prachi tells Ranbir that she is the only person who is shifting into that room to live with him so that she can take care of him.

Ranbir gets a bit surprised on hearing Prachi’s decision but gets interrupted by Rhea and Aaliyah’s shouts.

Prachi opens the window and asks them to lower their voices so that she and Ranbir can have their conversation in peace.

Infuriated by Prachi’s behavior, Rhea leaves to call Pallavi so that she can throw Prachi out of that room.

Pallavi was about to go to sleep when Rhea informs her about Prachi’s deed which makes her rush with Rhea towards Ranbir’s room.

Making Ranbir lie down properly on the bed, Prachi asks him if he has any problem regarding her shifting into that room.

Ranbir answers with a “no” at once when Pallavi, Rhea, and everyone burst into the room.

Pallavi asks Prachi how she can throw away Rhea’s stuff outside and asks her to bring it back which Prachi does not abide by.

Seeing Prachi’s nonchalant behavior, Rhea talks about Prachi’s plan of attacking herself through Nick and trying to kill Rhea.

Prachi straightaway lands a slap on Rhea’s face on hearing her words and warns her to utter her words carefully.

When the final statement of defence for Prachi comes to Ranbir, he fails to answer completely due to dizziness from the medicines.

Prachi tells Ranbir that his silence has humiliated her love for him at that moment.