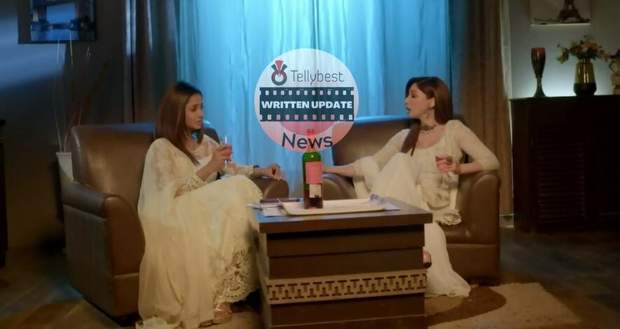 Today's Kumkum Bhagya 29th August 2022 episode starts with Mona stopping Prachi from leaving the place and taking everyone inside even though two girls succeeded in escaping.

To prevent any plans from working out, Mona sprays an alcoholic substance on all the girl’s eyes including Prachi.

Meanwhile, Sahana and Ranbir try to find out the truck in which Prachi was taken away and suddenly Sahana hits a girl with her car.

Sahana and Ranbir get out of the car to check on the girl and feel relieved to see that she is uninjured.

However, Ranbir begins to follow the girl and asks her if she has seen a woman named Prachi anywhere.

Sahana tries to stop Ranbir but feels thankful to him when the girl reveals about Prachi and other girls being kidnapped and kept nearby.

Following the directions, Sahana and Ranbir reach the warehouse and confirm the location by seeing the same truck parked there.

The goons send their boss the picture of Prachi and get happy as they like her, and ask them to bring her soon.

Sahana and Ranbir enter the warehouse by finding a suitable chance while Prachi acts like a drunk due to the spray and jokes around.

Ranbir meets Prachi and both share a hug with each other in their drunk state.

Sahana also comes there and gets relieved to see Prachi in a safe state. However, the goons intervene in their moment and separate Sahana from them.

Ranbir and Prachi make fun of the goon’s name and start to throw things at them joined by the other girls.

As the goon catches Sahana and fires his gun, everyone freezes in their spots with fear.

The goons decide to lock Ranbir and Prachi together in a room so they cannot create chaos.

Sahana gets tied up by the goons and begins to get nervous about the safety of Prachi and Ranbir.

After getting locked in the room, Ranbir and Prachi share a hug while asking about each other’s condition.

Ranbir asks Prachi why she left him like that without informing anyone but Prachi begins to cry in his arms.

© Copyright tellybest.com, 2020, 2021. All Rights Reserved. Unauthorized use and/or duplication of any material from tellybest.com without written permission is strictly prohibited.
Cached Saved on: Saturday 1st of October 2022 12:37:06 AM