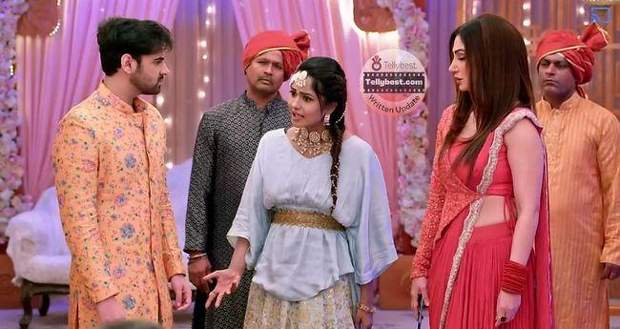 Today's Kumkum Bhagya 29th December 2022 episode starts with Prachi thinking of a plan so that she can hold off the marriage as the muhurat (auspicious time for the marriage) will get over after 15 minutes.

Prachi fakes falling to the ground by herself so that she can delay the marriage.

Sahana blames Rhea for pushing Prachi while she says that she herself was about to fall.

All the family members gather around Prachi and ask her if she is fine while Ranbir understands that Prachi is acting.

Ranbir gets up from his position and goes over to Prachi as he cannot let the time pass without finishing his marriage with her.

Ranbir picks up Prachi in his arms and goes to the mandap placing her beside him.

Prachi asks Sid (Ranbir) why he is hurrying with the marriage as she cannot marry him under any condition.

Ranbir decides to stay silent as he wants to take a little revenge on Prachi for hiding things from him.

Rhea asks the priest to continue with the marriage quickly so that they can get done with it.

The priest says that he has to start the marriage from the beginning again and asks the bride and groom not to interrupt in between.

Aryan notices Sahana smiling and asks her how she can be so happy when Prachi is getting married to Sid instead of Ranbir.

As Aryan says that he is going to stop the marriage, Sahana stops him and tells him that it is Ranbir sitting in the mandap.

Aryan gets happy to hear Sahana and says that finally, things are going the right way.

Meanwhile, Sid escapes with Mihika in the car with the goons chasing after him.

After Rhea does the gathbandhan, the priest asks the bride and groom to stand up for the marriage rounds.

Prachi refuses to get up and pushes away Rhea when she tries to force her.

As Prachi tries to walk away, Ranbir pulls her close to him and places her hand on his heart.

Prachi understands that the man is Ranbir and asks him what he is doing there instead of Sid.

Ranbir says that he could not take any risk with Prachi’s marriage and decided to come himself to get married to her.

Prachi gets happy as she is getting married to Ranbir and starts the marriage rounds with Ranbir.

At the same time, Mihika notices the goons coming after them on their bikes and informs Sid about it.

Sid increases his speed so that they can get away from them while Mihika gets nervous.

Rhea gets happy as Prachi and Ranbir complete the marriage rounds and proceed to the sindoor ritual.

Sahana and Aryan tell Dida the truth about Ranbir marrying Prachi instead of Sid which lights up her mood.

Ranbir puts sindoor on Prachi’s forehead and completes the marriage by making her wear the mangalsutra.

Prachi and Ranbir take blessings from Pallavi, Vikram, and Dida and feel happy about getting married in the family’s presence.

Rhea hugs Prachi and congratulates her for getting out of her life.

Just then, Ranbir reveals his face and tells Rhea that she is the one who is out of his and Prachi’s life.

Rhea goes crazy about seeing Ranbir and Prachi and screams that the marriage is invalid.

Ranbir tries to explain to Pallavi but she stops Ranbir and says that he did whatever he saw fit for himself.