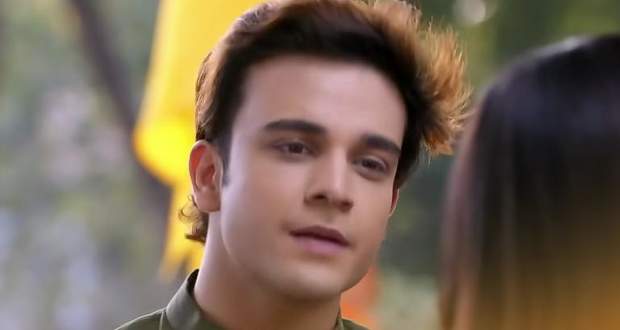 Today's Kumkum Bhagya 29 January 2021 episode starts with Aaryan and Jai arguing while Ranbir tells them that he has a plan to send Rhea home.

Elsewhere, the old couple tells Abhi and Pragya that they can stay there and Pragya shows her gratitude to them.

He tells them to eat and goes while Abhi asks the old lady about him.

Ranbir tells Rhea that Abhi is in grave danger and she leaves while he reassures her that he'll come behind her.

They all dance while Prachi sees them and asks them why they are happy and dancing.

Ranbir makes an excuse and they leave for the wedding.

Meanwhile, the inspector assures Purab that the hitmen after Abhi and Pragya are contract killers.

Abhi asks the old lady for a charger and she gives him a phone along with the charger.

Abhi calls Purab from the new phone and gives him the description of the hitman who came after them.

Pragya gets angry at him cause he didn't remember her number or birthday and leaves while Abhi goes after her.

The pandit tells Ranbir that he feels like he is cheating but Ranbir convinces him to do the wedding.

Elsewhere, Rhea reaches home where Tai Ji informs her that Abhi and Pragua not at home.

She tries calling Abhi but the call doesn't connect and she decides to call Prachi.

Elsewhere, the pandit does the rituals for Jai and Palak's wedding while Ranbir remembers his moments with Prachi.

Ranbir gets frightened and tells Jai and Aaryan that he can't betray Prachi and forcefully marry her.

Upcoming Kumkum Bhagya episode update: Prachi finds out about Pragya being in danger.