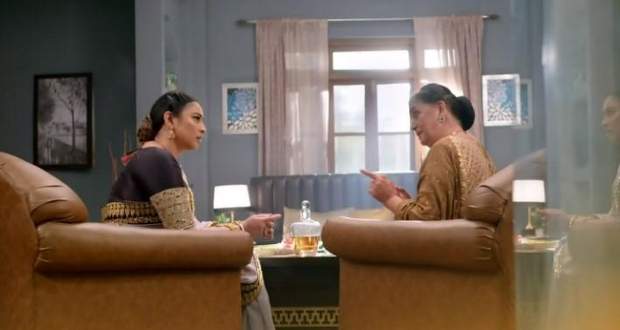 Today's Kumkum Bhagya 29th July 2022 episode starts with Ranbir dragging Rhea away from his house while Rhea begs to get in.

Just then, Prachi’s voice brings Rhea out of her dream and she gives Prachi her gift.

Meanwhile, Pallavi thanks everyone for making Prachi’s God Bharai successful and invites them to play a game Gudda and Guddi which is played between father and mother with blindfolded eyes.

Everyone praises the game while Pallavi asks Rhea to apply the blindfold on Ranbir and Prachi but she refuses citing the excuse that her thumb is hurt.

Ranbir goes to Prachi instead of selecting one for himself and tells everyone that his luck and his destiny are all linked with Prachi so whatever is in Prachi’s hand is his destiny and it cannot be different from each other.

After a while, Vendy (Parineet) takes Dida to the corner and tells her that Rhea is either not pregnant or her child will bring bad luck for the family and asks her to send Rhea home before things go southways.

Pallavi overhears her conversation with Dida and gets worried.

Meanwhile, the Party is in full swing while Ranbir dances with Prachi to a slow romantic song.

Afterwards, Ranbir thanks everyone for coming and asks everyone to have dinner before leaving.

Shayna tells Rhea that she can also come and live with her while Rhea looks at her in shock.

Meanwhile, Shahana comes to the terrace and finds Aryan there.

Aryan flirts with Shahana and misunderstands Stanley to be her boyfriend.

After a while, Aryan’s girlfriend Mili, Prachi and Ranbir comes on the terrace one by one.

Just then Pallavi joins them and tells Prachi that she has made these laddoos and insists her to eat.

Ranbir looks surprised at Pallavi’s lie and goes after her to seek an explanation from her.

© Copyright tellybest.com, 2022, 2023. All Rights Reserved. Unauthorized use and/or duplication of any material from tellybest.com without written permission is strictly prohibited.
Cached Saved on: Wednesday 25th of January 2023 02:42:24 PMCached Disp on: Thursday 9th of February 2023 08:26:42 AM