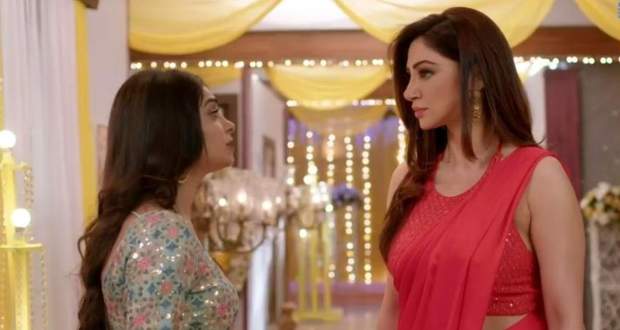 Today's Kumkum Bhagya 29th June 2022 episode starts with Ranbir returning home in a gloomy mood and Rhea asking him what the matter is.

Ranbir does not pay any attention to Rhea’s question and walks away making Rhea believe in Alia’s words.

Rhea understands that Ranbir will not be able to get over Prachi ever in this lifetime and thinks about Alia’s suggestion.

Meanwhile, Dida thinks of ways to tell others about Prachi’s pregnancy when Pallavi comes and asks her if she has talked with Prachi yet.

Dida asks Pallavi to grant a few days to initiate the conversation with Prachi to which Pallavi reluctantly agrees.

After Pallavi leaves, Prachi comes out wearing dry clothes and sits on the bed as per Dida’s command.

Dida asks Prachi to organize Pallavi’s birthday party to which she happily agrees.

At the same time, Rhea spots Ranbir sitting on the floor in one corner and tries to comfort him which he denies receiving.

Pallavi meets Rhea and informs her about the birthday party celebration.

Later, Ranbir tries to sleep in his room but the memories of him and Prachi constantly interfere with his thoughts.

Prachi also feels restless as she tries to sleep but gets shocked on hearing the door open loudly by Rhea.

Rhea rushes into the room and screams how much she despises and loathes Prachi’s existence and asks her to get out of the house.

As Prachi starts to get irritated, Rhea suddenly starts to apologize for the past actions that she committed toward Prachi.

Rhea reminds Prachi of their blood relation and asks her to do a favor for the sake of her unborn child.

While holding Prachi’s hand, Rhea requests Prachi to leave the house and get out of her and Ranbir’s life as Ranbir only loves Prachi.

Rhea tells Prachi how she wants to be a good mother and wishes that her child will get the love of their father.

© Copyright tellybest.com, 2022, 2023. All Rights Reserved. Unauthorized use and/or duplication of any material from tellybest.com without written permission is strictly prohibited.
Cached Saved on: Monday 21st of November 2022 12:46:18 PMCached Disp on: Saturday 3rd of December 2022 02:59:39 PM