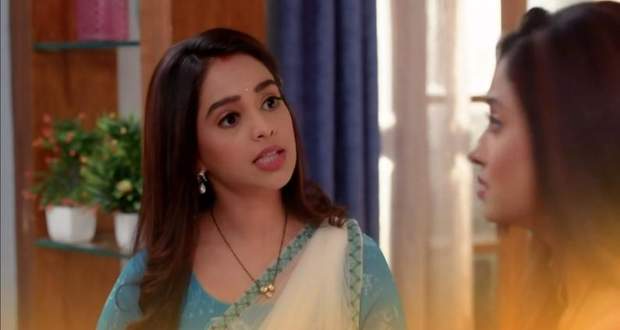 Today's Kumkum Bhagya 29th March 2022 episode starts with Jay asking Ranbeer about his problems to which Ranbeer denies anything related to Prachi.

After Jay insists Ranbeer share about the matter, Ranbeer breaks his silence and tells Jay about Prachi seeing him and Rhea on the same bed.

Jay asks Ranbeer to check out the CCTV footage of that day to check who made him drink “bhang”.

After thanking Jay for his idea, Ranbeer leaves for home while Rhea whines about Prachi to Aaliyah.

As Aaliyah hears about Prachi and Shahana’s words from Rhea, she gets sure that they do not have definite proof and are bluffing to make Rhea anxious.

Aaliyah suggests Rhea not be frightened by Prachi’s talk and commands her not to let them find any more proof against their plan.

On her way to the meeting, Aaliyah overhears Ranbeer asking for the CCTV footage from the day of Shiv Ratri and gets nervous.

Later, Ranbeer encounters Prachi in the kitchen as he proceeds to make sandwiches for dinner.

On seeing Ranbeer barely eating sandwiches, Prachi stops him and tells him that she will warm up the food kept in the refrigerator.

Ranbeer admires Prachi from a distance while she prepares food for him and sits together to enjoy the food together.

On the other hand, Aaliyah encounters Nick, Preeti’s boyfriend, on her way and helps him by lending him money.

Later, Rhea complains about Prachi trying to snatch away Ranbeer from her to Pallavi while reminding her of Prachi’s affair with Siddharth.