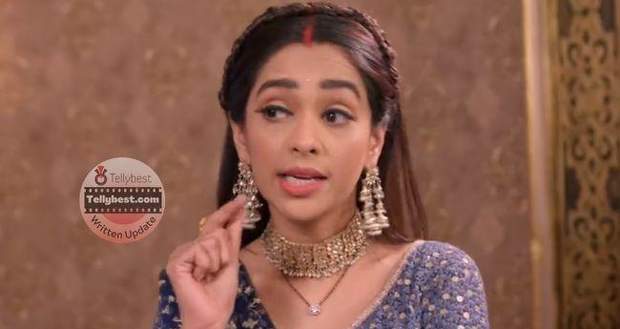 Today's Kumkum Bhagya 29th November 2022 episode starts with Rhea calling Alia and checking on the situation on that side.

Rhea asks Alia to come home soon as they need to celebrate their victory over Prachi.

However, Alia tells Rhea to control her happiness as the situation on the other side is much worse than she thinks.

Rhea refuses any negative news from Alia but still asks Alia to tell her about the status with Mihika and the goons.

Alia tells Rhea about Prachi, Sid, and Sahana arriving at the hotel and trying to take away Mihika and how she managed to stop them from leaving.

Rhea gets pleased on hearing that Prachi and others are captured as hostages by the goons and will lose their lives very soon.

Asking Rhea to come with her, Alia goes to pick her up as she is her lucky charm.

Meanwhile, Prachi, Sid, and Sahana run in different directions to escape from the goons.

Siddharth and Sahana somehow manage to go away from the goons but Prachi gets caught by one of the goons.

The goon wraps a cloth over Prachi’s mouth and drags her with him so that he can tie her up in a room.

As Prachi and the goon reaches the corridor of the second floor, Prachi notices Ranbir entering the house.

Ranbir looks around for Prachi and Sid but fails to find them in the dark and gloomy place.

Prachi hopes that Ranbir will look above at her but he goes out without giving a single glance at her.

Sid also gets caught by the goons and gets dragged inside along with Prachi so that they can be tied together.

Meanwhile, Alia and Rhea reach the house and wait for the goons to come and fetch them inside.

Ranbir misses seeing them by some seconds and passes by them while they go inside the house.

After entering the house, Alia and Rhea get lost and feel scared for their lives seeing the dark place.

Rhea clings onto Alia in fear thinking that some ghost is present there to haunt them.

Meanwhile, Prachi succeeds in getting free from the rope with which the goons tied her and Sid and tries to run away.

The goons come after them but get beaten up by Sid and Prachi.

Ranbir comes and beats up everyone and takes Prachi away with him followed by Sid.

© Copyright tellybest.com, 2022, 2023. All Rights Reserved. Unauthorized use and/or duplication of any material from tellybest.com without written permission is strictly prohibited.
Cached Saved on: Monday 28th of November 2022 11:19:08 PMCached Disp on: Tuesday 6th of December 2022 02:07:35 PM