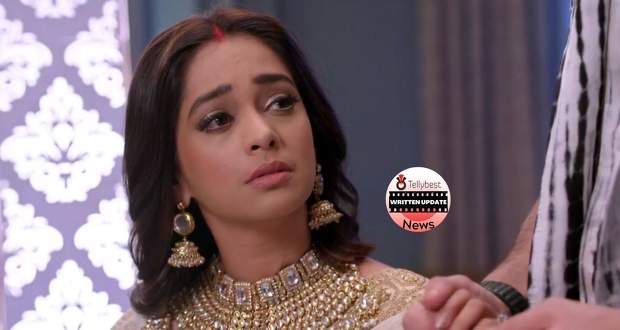 Ranbir watches Prachi coming to the function and smiling at everyone except him which stirs his heart a bit.

Seeing Wendy Dida, Prachi welcomes her with a warm smile and intentionally says she feels very good after preparing for the engagement.

Ranbir comes to Prachi and says that he is the one who prepared her so he has the right to get a bit of credit.

With a carefree smile, Prachi mocks Ranbir about how she is in a good mood and excuses him for being so helpful to her.

Ranbir feels weird after facing this new Prachi and asks Aryan if he notices something different in her.

From Sahana, Aryan learns about Prachi’s plan to make Ranbir confess his feelings and asks him to cooperate.

Meanwhile, Alia meets the goons in her room and gives them money for taking care of Mihika in an anonymous hotel.

Siddharth hears their conversation and hurries off to Prachi to inform her.

Prachi tells both Vikram and Pallavi about how she was clouded with unnecessary thoughts when all she had to do was smile and enjoy herself.

Ranbir gets thunderstruck on hearing Prachi’s words but Prachi walks away without giving any attention to him.

While Ranbir tries to figure out what is going on, he sees Siddharth approaching Prachi and both go inside together.

Elsewhere, Wendy Dida tells Rhea that Dida is trying to get rid of her so that she can reunite Prachi and Ranbir.

As Ranbir and Aryan try to eavesdrop on the door, Prachi opens the door making both of them crash on the floor.

Prachi asks Ranbir what he is doing there while Ranbir burns in jealousy about seeing Prachi and Sid together.