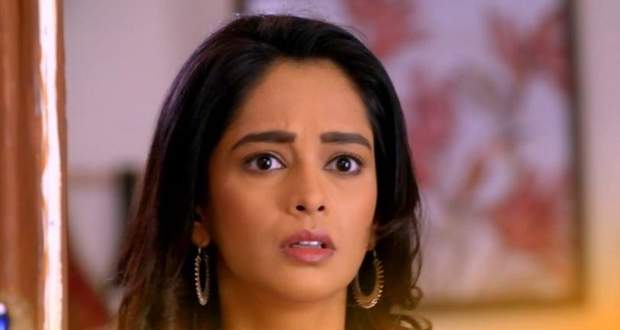 Today's Kumkum Bhagya 2 April 2021 episode starts with Pragya saving Abhi from the chandelier while Ranbir sees Pragya and gets shocked.

Prachi sees Ashok and the killer coming downstairs and suspects them for making the chandelier fall.

Vikram tells the guards to catch them but they fail to do it while the doctor tends to Abhi.

The doctor says that Abhi might have an internal injury in the brain while falling.

Everyone cries while Ranbir goes to hold Prachi's hand but stops himself.

Ranbir and Prachi collide near the door while Ranbir gets close to Rhea to make her jealous.

Ran it is in his room and wonders to get love like Pragya and Abhi's as she is working as a maid to be with her lover while money is everything for Prachi.

In the morning, Pragya comes to the Mehra mansion where she sees everyone middle around Abhi's room and asks them the reason for it.

The doctor announces that Abhi's mental health is improving and appreciates Gayatri's efforts while Tanu goes to get a courier of her.

She finds out that they are her divorce papers and gets happy while Aaliya comes there.

Aaliya tells her to get married to Abhi while Tanu says that she will him after he gets fine.

Aaliya argues that he will not even look at her after he gets fine as to what she did to Kiara along with Nikhil in the past and Tanu agrees to marry Abhi the same night.

Meanwhile, Ranbir sees Prachi while he is driving and goes in reverse to pick up Prachi.

Prachi sits in the car while he tells her that he is doing it just for Pragya and reminds her that that was the same place where guys had showed up.

Pragya makes paper planes for Abhi while he stops her and asks her to marry him.

He recalls the priest's words while Pragya tells him that they will marry after he gets fine.

© Copyright tellybest.com, 2020, 2021. All Rights Reserved. Unauthorized use and/or duplication of any material from tellybest.com without written permission is strictly prohibited.
Cached Saved on: Wednesday 8th of December 2021 12:18:25 AM