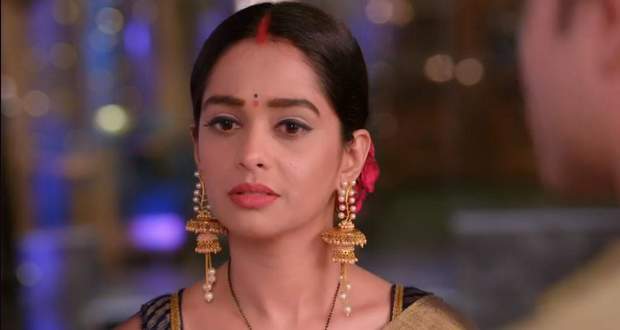 Today's Kumkum Bhagya 2nd August 2022 episode starts with Rhea trying to manipulate Aryan by acting emotionally in front of him.

Prachi asks Ranbir to stop acting sly after he kisses her on her cheek and both turn their backs in embarrassment.

Ranbir calls Prachi by his given nickname “chikchiki” and asks Prachi why she is continuously distancing herself from him.

Not being able to think of an answer, Prachi turns around and again flicks her hair on Ranbir’s face, hurting him in his eye.

Ranbir grunts in pain while Prachi makes him sit and blows on his eye to ease his pain.

Grabbing the opportunity, Ranbir asks Prachi if she still loves him to which Prachi refuses to give an answer as they have already ended the game.

Ranbir tells Prachi to be honest with him as they are the only ones there.

Prachi confesses that she still loves Ranbir which makes Ranbir hug Prachi tightly in his arms.

However, Prachi recalls Rhea begging her to leave the house as she wants to give her child all the happiness that one deserves.

Prachi leaves the room with Ranbir wondering what he did wrong to make her upset.

Sahana spots Prachi and goes behind her to look into what the matter is and discovers Prachi crying.

Prachi tells Sahana that she was clouded with delusions for a brief period but now has come to her senses.

Telling Sahana how Rhea is Ranbir’s wife, Prachi tells her that she is coming between them.

Sahana tries to make Prachi understand that she is also Ranbir’s wife and is going to be the mother of his child.

However, Prachi says that she cannot snatch away all joy and happiness from Rhea’s child as she is her own sister.

Pallavi and Rhea both eavesdrop on Prachi and Sahana’s conversation and smirk to themselves on seeing Prachi crying.

Prachi says that between her and Rhea, one has to sacrifice their rights and she will be the one to leave the house.

Hearing that, Pallavi panics as she wants Prachi’s child to become the successor of Ranbir.

Meanwhile, Aryan comes and confronts Ranbir regarding whatever Rhea told him.

Aryan hugs Ranbir and asks him to be careful of Rhea as she is still playing the victim when, in reality, she is the one who forced Ranbir to marry her.

Rhea tells Alia and Shaina how their plan is working and Prachi will leave the house.

At the same time, Pallavi goes to Dida and asks her to stop Prachi from leaving the house at any cost.