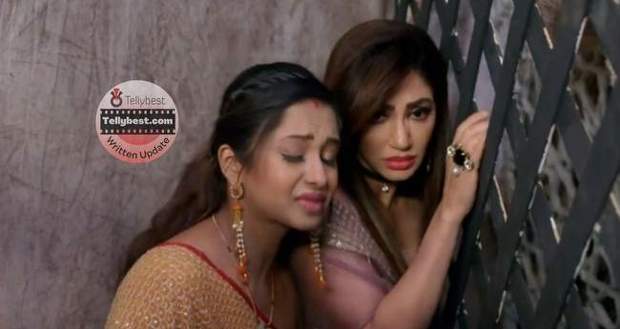 Today's Kumkum Bhagya 2nd December 2022 episode starts with Rhea leaving unconscious Ranbeer in the car and speaking that he has to stay there only and she leaves him.

A little while later, he wakes up and remembers all that happened before and he gets out of the car.

Ranbeer reaches the burning house and tries to wake Prachi, Mihika, Sid, and Sahana but they are still unconscious.

He finds a sheet and tries to look for water and at that moment Sid wakes up and tries to wake the rest of them and they leave.

Prachi doesn’t get conscious so Ranbeer wraps the cloth and picks her and looks for an exit unaware of the fact that he is below a chandelier.

Rhea comes back to the car and finds that Ranbeer is nowhere to find so she screams for Alia.

Alia asks her what happened and Rhea says that Ranbeer is gone.

One of the goons says that he must have gone to save Prachi, hearing this Rhea rushes but Alia puts some senses in her head.

Alia drags Rhea and tells her that Ranbeer will be safe and she orders the goons to bring Ranbeer out no matter what happens.

Alia drags Rhea and tells her that if she wants to spend her life with Ranbeer so Rhea has to follow Alia.

One of the goons takes the car, and Mihika, Sid, and Shahana return to save Ranbeer and Prachi.

At home, Pallavi gets worried and complains to Vikram.

Meanwhile, Sid, Mihika, and Sahana look for them near the same window.

Prachi tells Ranbeer that he should leave without her but he says that he’ll burn if she says something like that again.

The goons block their way and threaten them with a gun and shoot at Prachi but Ranbeer steps in between.

Sid, Mihika, and Sahana see Ranbeer get shot, and Prachi gets enraged and throws a huge rock at the goons.

Sid, Mihika, Prachi, and Sahana beat the goons and Prachi takes Ranbeer in her lap.

Ranbeer tells he’s happy that he’s in Prachi’s lap, and he asks her to tell him something good.

Ranbeer vision starts to get blurry and he loses consciousness.

Prachi screams at Ranbeer to wake up but he doesn’t then she tells Sid, Mihika, and Sahana to get a car from the back.

Sid takes Ranbeer and puts him in the car and drives to the hospital with the rest of them.

Meanwhile, Rhea gets worried and asks Alia to call her goons and find out about Ranbeer.

Alia mumbles to herself that Rhea’s love for Ranbeer has turned into an obsession which is a deadly combination.

Meanwhile, in the car, Prachi tries to wake Ranbeer and Sid tries to calm her.

© Copyright tellybest.com, 2022, 2023. All Rights Reserved. Unauthorized use and/or duplication of any material from tellybest.com without written permission is strictly prohibited.
Cached Saved on: Wednesday 25th of January 2023 09:38:38 AMCached Disp on: Monday 6th of February 2023 04:38:34 AM