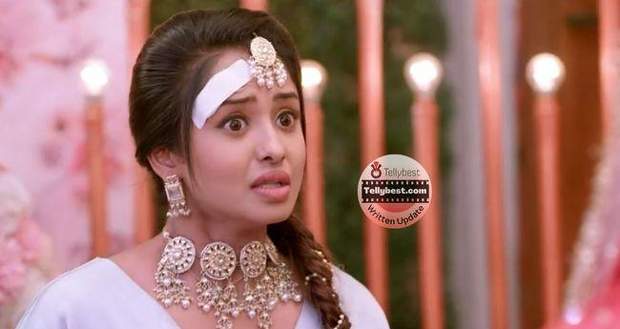 Today's Kumkum Bhagya 2nd January 2023 episode starts with the goons confessing to the family members that Alia was the person who asked them to kidnap Mihika.

Alia tries to mislead the goons by saying that she met them while trying to free Rhea but the goons get scared by Aryan and present their call records as evidence.

A flashback shows Aryan cracking a bargain with the goons that he will hand them over to the police if they try to escape.

The goons agree to confess everything to the family members as a condition of their being free.

Ranbir thanks the goons for telling the truth and asks them to leave the house which they follow silently.

Alia and Rhea start their drama in unison and act as if Rhea did not know anything about the kidnapping.

Rhea blames Alia for ruining her life and destroying her family and goes after Alia as she walks away from the mandap.

Alia tells Rhea that they have gotten stuck in their own plan and have no other way to get out of that.

Rhea gets shocked as Alia tells her that she is going to confess that everything was done by her and Rhea knew nothing about it.

Meanwhile, Pallavi blames Prachi for not informing them about Mihika’s kidnapping as she wanted to be great herself.

Everyone speaks in Prachi’s favor as she says that she was scared about Mihika’s life from Alia’s hands.

Ranbir asks Pallavi why she hates Prachi so much while Pallavi tells Prachi that she is creating barriers between her and Ranbir again.

Sid enters with Mihika and the family members make Mihika sit while taking care of her.

As Pallavi asks Mihika how she received so many wounds, Rhea pops out of nowhere and starts showing her fake sympathy.

Rhea apologizes to Mihika from Alia’s side and says that she would have saved her if she was aware of Alia’s wrongdoings.

Alia apologizes to everyone and says that she did everything for Rhea as Prachi was taking her place and rights.

Prachi says that she deserves her place and wanted to get back her husband who was snatched wrongly.

Pallavi concludes that Alia did everything out of desperation as she wanted to make Rhea’s child receive equal rights.

Prachi declares that Rhea is not pregnant and is fooling everyone by lying constantly.

Ranbir reminds everyone about Rhea’s DNA reports and leaves to get them along with Vikram, Alia, Pallavi, and Dida.

Before leaving, Ranbir thanks Aryan and Sid for their help and apologizes to Sid and Mihika.

Spotting Prachi at the temple, Ranbir hugs Prachi from behind and asks God to fulfill her every wish.