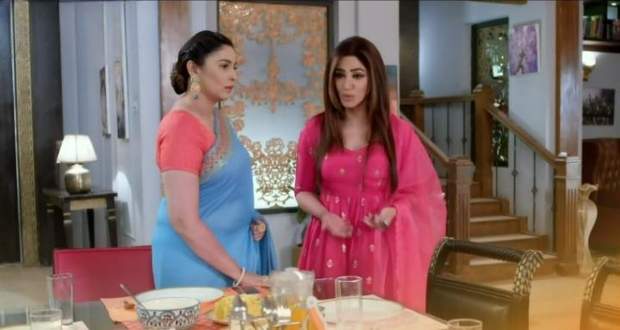 Today's Kumkum Bhagya 2nd June 2022 episode starts with Ranbir entering the house he and Prachi used to live in together in the past.

Seeing the house with his eyes, Ranbir recalls all his memories with Prachi and becomes happy.

The owner’s daughter-in-law comes and finalizes the deal with Ranbir about buying the house.

Stanley asks Ranbir why he is so persistent in buying that house as he can easily buy a nice flat with his money.

Ranbir tells him that Prachi worked herself to make that place turn into their home and he does not want to let it go.

After inviting the owner and their family, Ranbir leaves the house with Stanley.

Ranbir calls and asks for a red saree to be delivered to Prachi as he wants her to wear a new dress to the party.

Meanwhile, Rhea dances in happiness as she thinks that Ranbir is going to propose to her and throw Prachi out of the house.

Alia also joins Rhea in her happiness after telling her that Ranbir has forgotten about his and Prachi’s anniversary.

Prachi receives the saree from Ranbir and boils in anger as Ranbir has not mentioned their anniversary once to her.

Just then, Ranbir calls and asks if Prachi has received the saree to which Prachi asks him why he has sent her a saree.

Ranbir tells Prachi to wear that saree to the party which angers Prachi more.

Sahana asks Dida about the date but Dida cleverly distracts her from the topic without revealing anything.

Ranbir comes and thanks Pallavi for the arrangements.

As Rhea introduces herself as Ranbir’s wife, Mr. Khanna mistakes her for Prachi and tells her how Ranbir loves her madly.

Ranbir searches for Prachi and tries to compliment her look but Prachi brushes him off coldly.