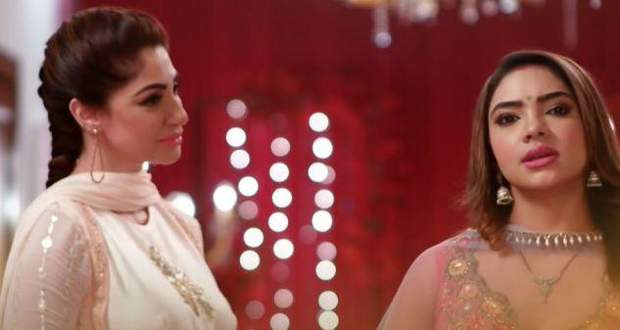 Today's Kumkum Bhagya 2nd March 2022 episode starts with Ranbir raising a toast to Vikram and Pallavi for their anniversary, he asks them to come on the dance floor and express their happiness.

Meanwhile, Dida joins them in the dance and enjoys the party.

The family seems to enjoy and have a great time whereas Ranbir plans a surprise for Prachi and tells her to wait for a while.

Rhea overhears their conversation and fumes out of jealousy. Rhea confirms the arrival of Prachi's pregnancy reports and women from the NGO.

As soon as the women from the NGO arrive Dida is skeptical about them.

Later on, Ranbir and Prachi dance passionately with each other while Ranbir persuades her.

The couple seems to be lost in each other's eyes as their hearts are filled with love.

After their dance, Prachi daydreams in Ranbir's thoughts while Ranbir holds her hand and asks her why she resists him to love her.

Ranbir requests Prachi to accept his love and promises to never hurt her.

With utmost love and passion, Prachi glances at Ranbir.

She apologizes to Ranbir for taking so long to express her love for him. Tears of joy roll out of Ranbir's eyes while Prachi tells him to meet her at the terrace.

Excited Ranbir jumps out of joy as he leaves for his room.

Meanwhile, at the party, Vikram seems tense and talks over the phone about meeting someone.