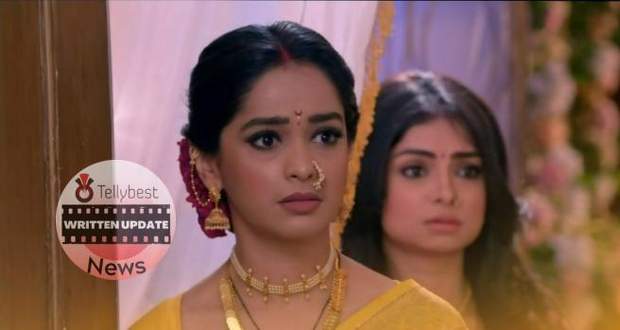 Today's Kumkum Bhagya 2nd September 2022 episode starts with Prachi, Ranbir, and Rhea praying to Ganeshji for different things to be resolved in their lives.

Alia tells Pallavi that what she has thought is the correct choice for the family’s reputation and the future of the younger generation.

Hearing Alia, Pallavi feels confident in her decision and tells Vikram that she wants to talk to him about something.

Vikram follows Pallavi to one corner and asks her what she wants to talk about.

Pallavi says that she utterly cares for Prachi and her child and wants her to have a comfortable and safe pregnancy.

Alia sees Vikram walking away with Pallavi following him while asking him to stop and wonders what would have caused that.

Meanwhile, Siddharth comes to Ranbir and tells him that he wants to have a talk with him in private.

Ranbir gets infuriated at first but follows Siddharth to listen to him.

However, Rhea notices Ranbir and Siddharth together and comes to interrupt them by taking away Ranbir with her.

Ranbir and Rhea come to the dance floor and dance to an energetic Ganpati occasion song.

As Ranbir bumps into Prachi, both their eyes lock on each other with their eyes doing the talk on their behalf.

Rhea comes and challenges Prachi for a dance face-off and both sisters show their dance skills on the dance floor.

Seeing that Prachi is feeling dizzy, Sahana takes her to the room so that she can rest properly.

Meanwhile, Siddharth again attempts to talk with Ranbir but fails as Rhea asks both of them to come to Pallavi’s room.

After everyone gathers, Pallavi and Vikram announce that they have made a decision for the betterment of the future of Ranbir, Rhea, Prachi, and Siddharth.

Pallavi says that it will be best to marry Prachi and Siddharth with each other regarding the situation given.

Everyone gets shocked on hearing Pallavi but no one resists her decision because Prachi is carrying Siddharth’s child.

Siddharth says that he and Prachi cannot marry each other which angers Ranbir and he questions Siddharth for a valid reason.

Pallavi announces that Prachi and Siddharth’s engagement will take place the next day and the marriage will be done next week.