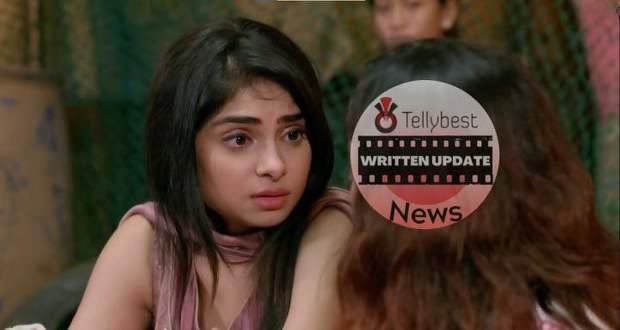 Today's Kumkum Bhagya 30th August 2022 episode starts with Pranbir being locked in a room by the kidnappers.

Ranbir and Prachi are out of their mind acting cute but strange and Ranbir begins complimenting Prachi for her features and says that he gets lost in her beautiful eyes.

During their conversation, Prachi says this is her baby but Ranbir forces her to say ‘our baby’, she complies and admits that this is their baby.

Following this Ranbir hesitatingly yet cutely asks Prachi for a kiss and Prachi gets shy, hiding her face.

Meanwhile, Shahana and the kidnapped girls make a plan for her to escape which executes successfully and Shahana runs outside only to find two goons present there. She hides beneath a carton and somehow manages to escape from them with difficulty.

Shahana gets into the car and searches for keys but does not find them instead she finds Ranbir’s phone and calls Vikram.

She explains to him the situation and informs him of their location.

Vikram, Pallavi, and Dida rush to help them followed by Rhea and Alia who joins later.

On the other hand, Siddharth feels anguish and regret through his blood and his inner voice tells him to tell Rhea’s truth to Vikram and believe that Vikram and others will help Siddharth save his sister.

He runs to Vikram only to find the house empty. Therefore, he calls Vikram to meet him but Vikram informs him that Prachi, Ranbir, and Shahana have been kidnapped.

He further orders him to come to the location as soon as possible.

Siddharth gets shocked by the situations unfolding but is adamant to save Prachi and Ranbir and tell the truth to everyone.

In between the scenes, the locked room of Prachi and Ranbir see different chemistry between them.

The kidnapped girls who helped Shahana escape peek through Pranbir’s room window and tease Prachi that if Prachi won’t kiss Ranbir then she will.

Prachi gets jealous and claims that Ranbir is her husband and only she gets to kiss him.

The cute duo tries every possible way to kiss but ends up bickering with each other either on the topic of the size of the nose or that girls do not kiss boys.