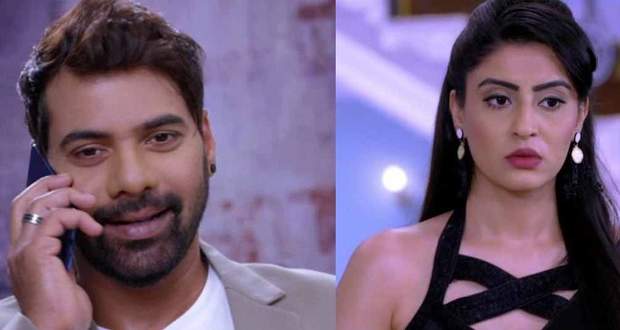 Today's Kumkum Bhagya 30 December 2020 episode starts with Rhea and Ranbir hiding behind the sofa while the goon threatens her to come out of hiding.

Prachi decides to save her and shows herself to the goons who realise that she is also Abhi's daughter and decide to punish her for Rhea's deeds by killing her.

However, she runs away from them while Ranbir comes out of hiding and goes after her to save her.

The goons capture her and put a knife near her neck while Ranbir and others come there and start beating the goons.

Elsewhere, Goga Bhai threatens to kill Pragya while Abhi comes there and they both start beating the goons.

Inspector Saho and the police team comes there and arrests all the goons while Abhi praises Pragya.

Meera brings ointment for Abhi but Pragya does his dressing which irritates Aliya.

Aliya takes Meera to side and berates her for letting Pragya do Abhi's dressing.

Later, Meera goes upstairs and Abhi goes after her which upsets Pragya.

Meanwhile, police arrest the goons while one of the goon threatens Ranbir that he will pay for this.

One officer tells Ranbir that he wants to talk with him privately and tells the others to go.

At the same time, Pragya goes to bring the necklace while Pragya sees Abhi consoling Meera and feels heartbroken.

Rhea takes the necklace from the police and says that she would like her mother to wear it and tells Abhi that she will keep it.

Abhi and Meera get engaged while Pragya watches them and feels pain.