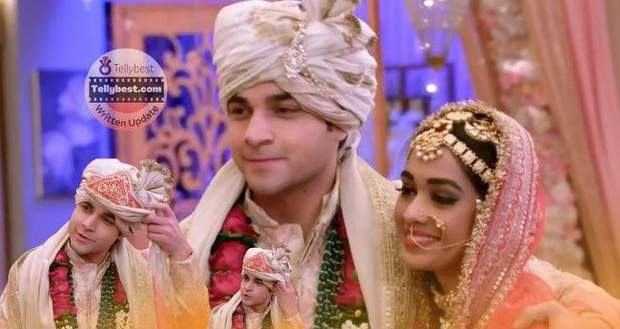 Today's Kumkum Bhagya 30th December 2022 episode starts with Pallavi asking who among the family members was aware of Ranbir marrying Prachi instead of Sid.

Sahana, Aryan, and Dida raise their hands and say that they knew that it is Ranbir under the veil.

As Pallavi questions Dida who told her the truth, Alia interrupts and says that it is not important now as Ranbir and Prachi are already married.

Rhea erupts in anger and destroys Prachi’s garland announcing that the marriage is invalid.

Ranbir asks Rhea to destroy everything as she will never be able to destroy the love between Ranbir and Prachi.

Ranbir says that he and Prachi themselves cannot break their bond and are bound to be together.

Accepting that there were misunderstandings between him and Prachi, Ranbir says that he will only love Prachi till his death.

Prachi stares at Ranbir lovingly as he says that he sees and thinks of Prachi even when she is not around him.

Alia stops Ranbir and asks him why he did not say anything when Prachi and Sid’s marriage was being decided.

Ranbir replies that he was not aware of the fact that Alia and Rhea had kidnapped Mihika then.

Alia says that she is not interested in answering such a nonsense question as Ranbir is making up an imaginary scene.

Sahana asks Alia to stop lying and says that they spotted her at the hotel clearly where Mihika was kept as a hostage.

Alia asks Sahana not to talk in the middle and proceeds to slap her but Prachi stops Alia’s hand and says that Sahana is her family.

Prachi says that Sahana is her sister who has been there for her since the beginning and she will not let anyone insult her.

As Ranbir, Prachi, and Sahana say that Alia is the culprit, Alia begins to get nervous as the others start questioning her.

Just then, Aryan comes and says that he saw his mother in the hotel talking with the kidnappers which shock everyone.

Alia asks Aryan what he is saying but Aryan replies that he will not side with her as he is ashamed of her deeds.

Meanwhile, Sid and Mihika’s car get surrounded by two goons from both ways and they drag Mihika out of the car.

Sid beats up the goons with a hockey stick and succeeds in escaping with Mihika after taking away the bike keys of the goons.

Ranbir calls in the two goons who were in the hotel and they say that it was Alia who asked them to kidnap Mihika.

Seeing Rhea nervous, Sahana asks her if she knows the goons to which the goon says that they kept her hostage for money.

Alia tries to deny all the accusations but gets silent as the goons show the call records where they spoke with Alia.

© Copyright tellybest.com, 2022, 2023. All Rights Reserved. Unauthorized use and/or duplication of any material from tellybest.com without written permission is strictly prohibited.
Cached Saved on: Wednesday 25th of January 2023 10:16:51 AMCached Disp on: Wednesday 1st of February 2023 09:33:06 PM