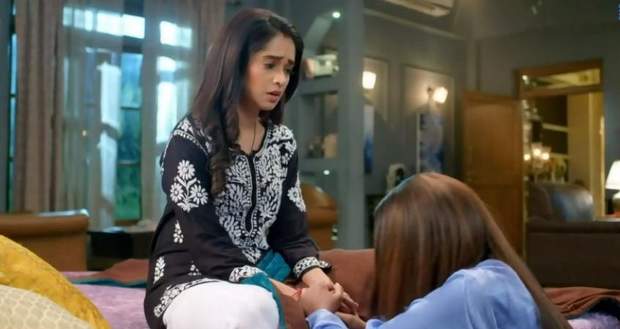 Today's Kumkum Bhagya 30th June 2022 episode starts with Rhea coming into Ranbir’s room while he was lying on the bed.

Rhea thinks Ranbir is asleep and takes Alia’s call to confirm that she has said all those things to Prachi as per Alia’s suggestion.

Ranbir becomes alert on hearing Prachi’s name and wonders what Rhea might have said to Prachi.

However, Rhea goes outside the room to talk further while Ranbir decides to follow her.

Alia asks Rhea to meet her on the terrace so they can share their words properly which Ranbir overhears.

As Rhea proceeds toward the rooftop, she gets stopped by Pallavi who takes her to Dida’s room for a ritual.

Meanwhile, Prachi tells Sahana that it would have been her instead of Rhea now if she decided to disclose her pregnancy earlier.

Sahana asks Prachi to stop worrying about the past and encourages her to fight for the happiness of her child.

At the same time, Pallavi and Rhea come to Dida’s room and ask her to perform the Nazar ritual on Rhea.

Dida reluctantly does the ritual but tells Pallavi that she is agreeing to it only because she cares for the family.

Ranbir waits outside the room thinking that Rhea will go to meet Alia but she gets taken to her room by Pallavi.

Coming back to Prachi’s room, Sahana asks Prachi what Rhea told her earlier that put her in such a bad mood.

Prachi tells Sahana about Rhea’s request for her child and stresses the fact that Rhea’s motherhood was reflected faintly through her words.

Just then, Ranbir comes into the room and asks Prachi what conversation she had with Rhea earlier.

Prachi refuses to say anything and asks Ranbir to leave at once.

On hearing that there is no relationship left between him and Prachi, Ranbir tries to make Prachi confess her pregnancy.

Prachi questions Ranbir why she has to fight daily for her natural marital rights leaving Ranbir silent.

After announcing that she will not let go of her rights to the family and the house, Prachi walks out of the room.

The whole conversation gets overheard by Rhea who meets Alia and tells her that her advice of begging Prachi has become a flop.

© Copyright tellybest.com, 2022, 2023. All Rights Reserved. Unauthorized use and/or duplication of any material from tellybest.com without written permission is strictly prohibited.
Cached Saved on: Wednesday 25th of January 2023 12:46:38 PMCached Disp on: Sunday 5th of February 2023 12:40:25 PM