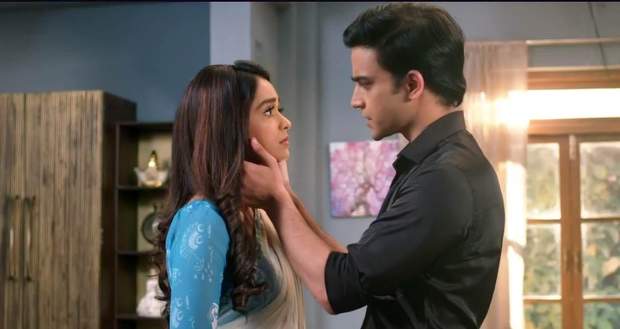 Today's Kumkum Bhagya 30th March 2022 episode starts with Rhea projecting herself as the victim in front of Pallavi and accusing Prachi of taking away Ranbeer from her.

As Rhea sheds her crocodile tears, Pallavi feels terribly sorry for her and promises to give her the full rights of being the wife of Ranbeer.

Along with Pallavi, instigated by Rhea’s manipulative words, Rhea walks towards the kitchen to face Prachi and give her a hard time.

Meanwhile, Prachi and Ranbeer finish their dinner with Prachi going back to her ice-cold behavior towards Ranbeer.

Ranbeer requests Prachi to talk to him for 5 minutes without arguing or fighting to which Prachi accuses Ranbeer of spoiling everything between them.

As Prachi was about to leave the kitchen, Ranbeer stops her by holding onto her saree and gets closer while caressing her locks.

Ranbeer reminds Prachi of the old days when they both used to enjoy each other’s company and expresses his wish to get back to those days.

However, their moment gets ruined as Pallavi and Rhea walk into their conversation and accuse Prachi of acting shamelessly towards Ranbeer.

Pallavi starts with her talk of Prachi trying to seduce Ranbeer in the same way she did to Siddharth.

Hearing this, Ranbeer stops Pallavi and clearly tells her not to mention that night again as he till today regrets his mistake of not trusting Prachi.

Ranbeer tells them that it is he who wants to get back Prachi’s trust at any cost while Prachi does not love or trust him anymore.

Further, Ranbeer stresses the fact that the only mistake he made was to marry Rhea.

Rhea runs to her room and starts screaming in anger remembering Ranbeer’s words, she tells Aaliyah that they have to plan to erase Prachi from this world.

On the other hand, Pallavi cries and tells Vikram that Ranbeer has accused her of being a bad mother due to Prachi who is creating walls between mother and son.