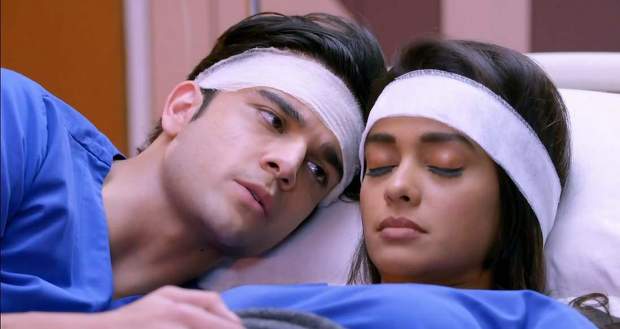 Today's Kumkum Bhagya 30th May 2022 episode starts with Ranbir promising Prachi that he will take extra care of her from now on as she has fulfilled his third wish.

Ranbir carefully plans how he is going to treat and take care of Prachi from now on as she needs to be pampered.

After remembering the past, Ranbir regrets suspecting Prachi’s character and promises not to repeat such a mistake.

Ranbir concludes that he must be receiving punishment for not trusting Prachi back then and that is why Prachi has not revealed her pregnancy to him.

Ranbir gets hyped up on imagining being a father and hugs Rhea as she enters the room.

Just then, Prachi wakes up and spots Rhea grasping Ranbir in her arms with satisfaction on her face.

Prachi calls the nurse and announces that she wants to go home instantly.

Ranbir suggests Prachi rest at the hospital for a few more days but Prachi refuses and gives an angry look at him.

Later, Ranbir brings his car outside the hospital and spots Rhea standing there.

Seeing Prachi, Ranbir understands that she is angry at him but fails to figure out the reason.

The whole car ride is filled with awkwardness and silence that makes everyone uncomfortable.

Finally, a call from Jay breaks the silence and informs Ranbir that some client has arrived to meet him.

Ranbir tells Jay to ask him to come the next day but Prachi refuses Jay to do so.

Eventually, they reach home and proceed to walk inside when Prachi’s saree gets stuck in Ranbir’s watch.

Ranbir and Prachi both try to undo the saree from the watch and sneak at each other from the corner of their eyes.

Rhea comes and tears apart the saree from the watch, making Prachi and Ranbir shocked.

After Ranbir leaves, Rhea warns Prachi to stay away from Ranbir.