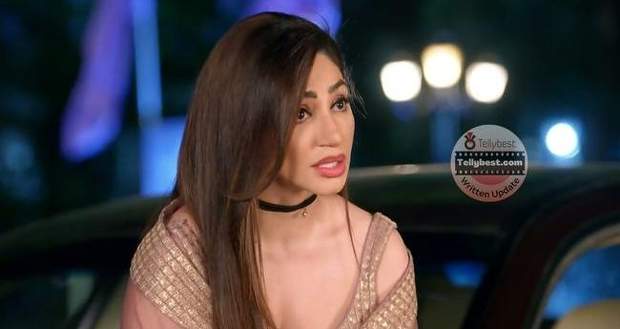 Today's Kumkum Bhagya 30th November 2022 episode starts with Rhea getting impatient about lighting the place on fire while Alia asks her to sit down calmly.

Rhea says that she is scared to be there as the place is very creepy making Alia roll her eyes in a mode of mockery.

The goon comes to meet Rhea and Alia and asks Rhea to dismiss her past behavior toward him.

As Alia asks Rhea to be friends with the goon, Rhea lands a slap on his face and tells him to know his place.

Alia asks the goon to show them the way to the exit so that they can set the place on fire.

Meanwhile, Ranbir brings Prachi with him and asks her what she is doing in such a place with Siddharth.

Prachi asks Ranbir what he means by such a question to which Ranbir tells Prachi that he thinks that she is trying to fool him by acting to love him.

Prachi stands shocked on hearing such a thing while Ranbir says that Prachi left with Sid so that they can spend some quality time together.

Prachi says that she is not answerable to Ranbir and walks away but Ranbir stops her and says that she has to answer his questions.

Seeing Ranbir suspect her again, Prachi says that no matter what she says, he will think whatever he wants to think so that he can consider his guess right.

Ranbir asks Prachi to answer his question without twisting her words while Prachi asks Ranbir to think about the situation himself.

Suddenly, a mouse walks over Ranbir and Prachi at the same time making them jump in fear.

As Ranbir denies hearing any explanations, Prachi walks off and says that she is going to Sid as she is supposed to be with him.

Sahana meets with Prachi and tells her that she has found where Mihika has been kept and is accompanied by a masked man.

Prachi and Sahana enter that room but find Sid tied up there who says that the masked man escaped along with Mihika.

Meanwhile, Alia and Rhea learn that Ranbir is in that house and ask the goons to pause their plan as Ranbir cannot be hurt.

Ranbir hears Rhea’s voice and follows it which leads him outside after Alia and Rhea.

Alia asks Rhea to sit in her car and hides when she sees Ranbir coming that way.

As Alia watches Ranbir looking around, she wishes that he would leave as soon as possible from there.

© Copyright tellybest.com, 2022, 2023. All Rights Reserved. Unauthorized use and/or duplication of any material from tellybest.com without written permission is strictly prohibited.
Cached Saved on: Thursday 26th of January 2023 05:31:18 AMCached Disp on: Tuesday 31st of January 2023 07:34:25 PM