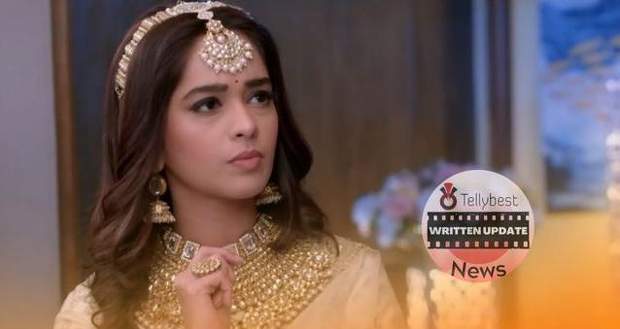 Today's Kumkum Bhagya 30th September 2022 episode starts with Sahana asking Prachi why she is acting so heartless toward Ranbir.

Prachi replies that she is acting in that way intentionally as she wants Ranbir to confess that he loves her and does not want her to marry Sid.

However, Sahana takes Ranbir’s side and asks Prachi not to be so heartless as Ranbir is getting hurt by her behavior.

Prachi mocks Sahana for her sudden care toward Ranbir and tells her to mind her own business.

Sahana escapes from there as she cannot handle the tension along with Siddharth leaving Prachi alone.

Ranbir comes and asks Prachi why she is acting in such an unusual manner to which Prachi replies that she is simply happy.

As Prachi tells Ranbir how her compliment made Sid shy, Ranbir clenches his teeth with jealousy as he cannot see that.

Ranbir says that Prachi is supposed to be sad as it is her engagement today but Prachi instead thanks Ranbir while holding his hands.

Prachi tells Ranbir that it is only because of him that she has realized that this marriage will make her happy in the future.

Hearing this, Ranbir goes haywire and asks Aryan to make Prachi understand what she is saying.

Aryan also decides to be on the safe side and escapes from there after giving some excuse.

Saying there is something on Ranbir’s face, Prachi caresses his face with her hands while Ranbir closes his eyes in ecstasy.

Suddenly, some flowers fall from the decoration and Prachi blames Ranbir for his lousy work.

Prachi tells Ranbir that he always spoils things to which Ranbir asks her to fix them as she always does.

Elsewhere, Rhea and Alia confront Dida and Wendy for Wendy’s behavior with Rhea.

However, Wendy acts savagely in front of them and calls both Rhea and Alia “uncivilized” making them furious.

Dida praises Wendy for her “boss attitude” in front of Alia and Rhea and says that Prachi is the one and only for Ranbir.

Later, Pallavi and Vikram dance to a Punjabi song followed by Ranbir entering the dance floor with Prachi.

Ranbir asks Prachi why she is so happy suddenly while Prachi questions Ranbir if he is jealous.

Dida notices Prachi’s changed attitude and becomes happy when Sahana tells her that Prachi is not going to do the engagement.

© Copyright tellybest.com, 2022, 2023. All Rights Reserved. Unauthorized use and/or duplication of any material from tellybest.com without written permission is strictly prohibited.
Cached Saved on: Monday 21st of November 2022 05:16:51 AMCached Disp on: Wednesday 7th of December 2022 01:07:37 PM