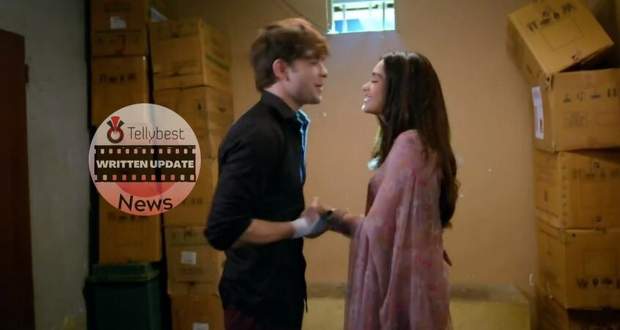 Today's Kumkum Bhagya 31st August 2022 episode starts with Prachi confessing her love for Ranbir by saying “I love you” to him in her drunk state.

Ranbir feels happy on hearing Prachi’s confession and pulls her in a warm hug with a smile on his face.

Meanwhile, Sahana finds the charger in the car so that she can call Vikram again to give him more details.

The goons come running in Sahana’s direction after hearing a sound and searching for any person present.

Sahana smartly hides the mobile phone in the car and acts as if she is trying to escape in the car but gets dragged inside by the goons.

Elsewhere, one of the goons cracks the deal with a henchman who will help them to take the girl across the border.

The man tells the goon to bring their tempo with the girls to the required location within the next 30 minutes, only then can he help them.

After getting the message from his man, the head of the goons commands his men to get every girl ready to load in the tempo.

In the meantime, Ranbir asks Prachi to tell him “I love you” with open arms so that they can hug each other.

As the goons catch the girls who were standing by Prachi and Ranbir’s door, Prachi asks Ranbir to save them.

Ranbir gets out of a window to save the girls while the goons come and drag Prachi with them.

Coming after the goons, Ranbir kicks them out of his way and hugs Prachi tightly in his arms.

On the other hand, Vikram, Pallavi, Dida, Alia, and Rhea reach the warehouse and decide to enter the place quietly.

Seeing Ranbir hugging Prachi, Rhea tries to go inside but Pallavi stops her by silencing her voice with her hand placed on her mouth.

However, the goons see Pallavi and Rhea and ask them what they are doing there.

Pallavi acts as a lady who has kidnapped Rhea in Sahana’s direction but Ranbir and Prachi start to call her “mom”.

The whole family enters and attacks the goons together and beats them up mercilessly.

The head of the goon tries to escape after dragging Prachi but Siddharth stops him and Ranbir lands the finishing blow.

Just then, the police arrive and arrest the whole gang while thanking Ranbir’s family for their help.

Back at home, the family members lay both Prachi and Ranbir in their rooms and thank God for not causing any bigger trouble.

Siddharth promises Ranbir that he will make things right soon and will not ruin things anymore.