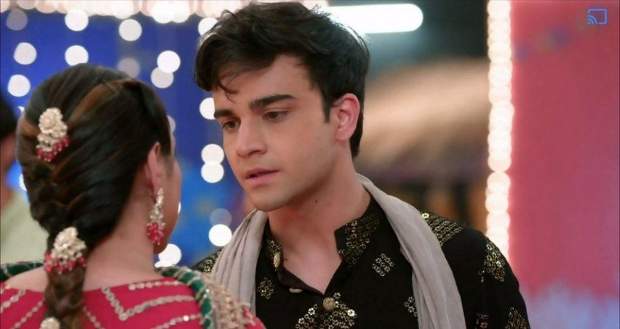 Today's Kumkum Bhagya 31 Jan episode starts with Ranbeer carrying Prachi inside the house and trying to help her to treat her burnt foot.

Prachi, however, tries to stop Ranbeer from trying to help her and tells him that she does not require any kind of sympathy from him.

Further, Prachi warns Ranbeer to stop pretending to care for her as she already knows his true self.

Sahana tries to intervene but gets shushed up by Prachi who blames Ranbeer for showing artificial care for her despite her resisting it.

Ranbeer asks Prachi to stop acting like a baby and tells Sahana to fetch the first aid box, Prachi, however, stops Sahana from going anywhere.

Prachi remains unmovable at her words, Ranbeer walks away to the room so that he can bring the first aid box.

Following Ranbeer to the room, Rhea confronts him for helping Prachi despite her creating such a scene about it.

Rhea asks Ranbeer if he has self-respect left; Ranbeer asks her to ignore everything if she does not like it because he can’t see Prachi in pain.

Ranbeer returns with the first aid box but as he proceeds to touch Prachi, she warns him to not lay a hand on her or else she will call the police.

Pallavi and others call Prachi mad and ask Ranbeer to step back from her.

For a moment, Pallavi drags Vikram to the side and asks him to do something but Vikram does not take any steps.

Prachi calls the police as Ranbeer applies the medicine on her foot, the police assure to arrive at the house soon.

After a while, the police enter the house and ask about the situation, Ranbeer asks them about his crime in helping Prachi in need.

Further, he tells everyone that he helped Prachi for his wife Rhea so that no one can blame her.

The police warn Prachi against making a useless complaint and leave after asking them to resolves the matter by themselves.

Ranbeer mocks Prachi for her stupidity and tells her that he is not wrong.