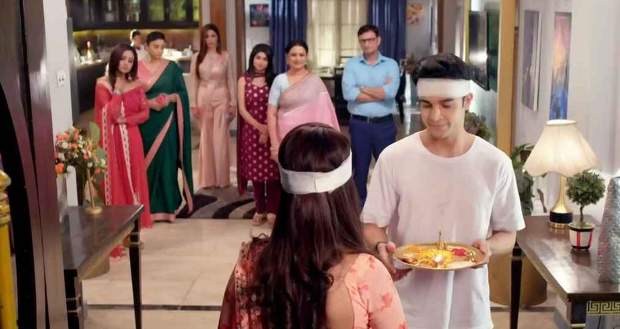 Today's Kumkum Bhagya 31st May 2022 episode starts with Prachi being welcomed by Ranbir with puja thali in his hand.

Ranbir says that he wants to do Prachi’s aarti and asks Sahana and Rhea to go inside.

Seeing Ranbir’s sudden step toward Prachi, Pallavi and others ask him the reason behind it.

Ranbir says that Prachi deserves the welcome and proceeds with his aarti.

However, Rhea does not mind Ranbir’s closeness with Prachi and smiles by herself on remembering Ranbir’s hug.

Alia notices Rhea’s unusual behavior and follows her into the room where Rhea starts to dance with Alia.

On asking, Rhea reveals Ranbir developing feelings for her and hugging him at the hospital.

Alia congratulates Rhea on proceeding through the stages with Ranbir in their relationship.

Meanwhile, Prachi tells Sahana about the image she saw with her eyes of Ranbir happily hugging Rhea.

Sahana warns Prachi that Ranbir will eventually find out about her pregnancy.

However, Prachi answers that she will tell Ranbir about her pregnancy and leave him to let him suffer the same way she did.

On the other hand, Ranbir thanks god for protecting Prachi throughout all troubles of her life and binding him with her.

Ranbir wishes for a daughter and helplessly gets boosted on imagining the situation.

Suddenly, Ranbir remembers his and Prachi’s 3rd marriage anniversary and wonders what he should give Prachi.

Later, Ranbir finds Prachi in her room and feeds her by himself.

Prachi refuses to be fed by him but Ranbir insists on her eating a bit with his hands.