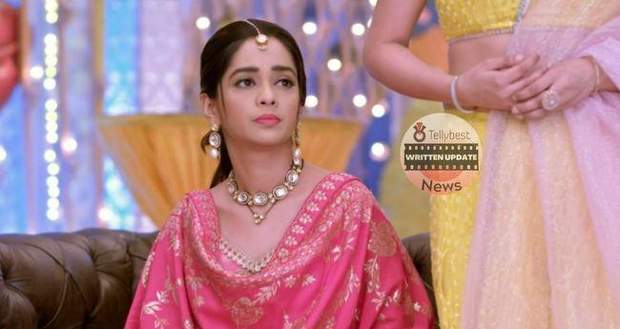 Today's Kumkum Bhagya 31st October 2022 episode starts with the tailor recalling his conversation with Alia regarding the dupatta that he made from gunpowder.

He then wonders whether someone got killed due to the dupatta he made and calls up Alia again and again to clarify the same.

Meanwhile, Alia’s phone is with Inspector Yamini who inquires with Alia as to why the tailor is calling Alia repeatedly despite her telling him to present himself in front of her as soon as possible.

Shahana brings out tea and Ranbir notices a paper stuck to her shoe, which Yamini then takes to investigate.

Meanwhile, Prachi takes Dida upstairs to feed her medicines, and Ranbir looks on adoringly at them.

Ranbir asks Prachi to ask him why he is so rude to her always and they share a romantic moment where Ranbeer almost confesses his feelings towards Prachi, but Prachi calls him arrogant.

Prachi feels jealous that Ranbir is lately taking great care of Rhea and he lovingly calls her Mrs. Jealous.

In the meantime, the tailor arrives at the residence, and Yamini starts interrogating him as soon as he steps foot inside.

She shouts at him asking on whose orders did he make such a dangerous dupatta, and he without answering tries to flee only to be caught by Ranbir.

Yamini angrily asks him again to name the person who told him to make the dupatta to kill Prachi and he shakily points toward Alia, which leaves everyone baffled.

Alia stutters saying that the tailor has been bribed to take her name and shouts at the tailor, to tell the truth, but Yamini doesn’t believe Alia and accuses her of being the perpetrator.

Ranbir desperately asks Alia as to why she attempted to kill Prachi, while Vikram asks him why did she not even think about Prachi’s unborn child.

The tailor then reveals that the person who actually wanted to get Prachi killed is Pallavi, which shocks everyone to their core, saying this the tailor runs away and everyone goes behind him to apprehend him.

Meanwhile, at home, Pallavi says that maybe the target isn’t just Prachi but the whole family.

Rhea chimes in saying that she also feels that someone constantly keeps a watch on her.

Vikram pleadingly tells everyone to go and rest for a while and assures everyone that everything will be all right in the end and assures Prachi that the whole family is standing in support of her.

© Copyright tellybest.com, 2022, 2023. All Rights Reserved. Unauthorized use and/or duplication of any material from tellybest.com without written permission is strictly prohibited.
Cached Saved on: Monday 21st of November 2022 03:10:40 AMCached Disp on: Wednesday 7th of December 2022 03:18:47 PM