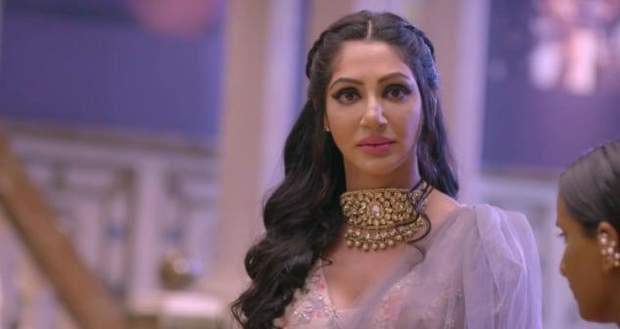 Today's Kumkum Bhagya 31 March 2021 episode starts with Rhea asking Abhi where Ranbir and the other girl are and him signing towards the pillar.

Ran it tells Prachi that he can't trust her and insults her saying that she purposefully sent Sahana there.

He further calls her a gold digger and opportunist and incites her to break his engagement while she says that she won't do it as she wants the engagement to proceed.

Ranbir gets angry and goes behind her to pull her near him.

He scolds her and tells her to give back the engagement ring and snatches it from her hand while she says that she is hurting.

Prachi tells him that she doesn't love amd to multiply it by one million times to that he doesn't have any misunderstanding.

He hits his head on the pillar and she stops him while he says that he knew she still loves him.

However, Rhea comes there and sees them while remembering Abhi's words.

She check's Prachi's hand but doesn't find it there after which Ranbir takes her away saying that he wants to talk to her privately.

He tells him that one gets married by taking rounds while trying the Gathbandhan.

Pragya comes there and Abhi asks her if she'll beat to which she declines.

He takes her hand and takes rounds of the lamp on the table and says that he got married to the girl who didn't beat him.

Tanu gets angry seeing the scene and takes Pragya with her.

Tanu confronts Pragya and complaints about her to Aaliya.

Tanu says that she's like Pragya while Aaliya says that Pragya left him on stretched in the hospital unattended.

Rhea comes there and tells them to not take her name and says that she hates Pragua while Pragua gets upset hearing that.

© Copyright tellybest.com, 2020, 2021. All Rights Reserved. Unauthorized use and/or duplication of any material from tellybest.com without written permission is strictly prohibited.
Cached Saved on: Thursday 29th of April 2021 08:35:45 AMCached Disp on: Thursday 6th of May 2021 06:03:12 AM