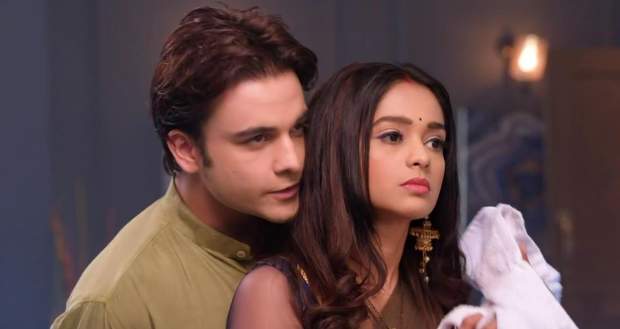 Dida explains to Pallavi that at this moment she will need to find a permanent solution for Prachi so that she does not talk about leaving again.

Dida tells Pallavi to find out what is bothering Prachi and then find a solution for her.

Meanwhile, Prachi and Shahana enter the room to find Ranbir hugging Aryan and looking at them weirdly.

After a while, Ranbir looks after Prachi like a porcelain doll and makes her go to sleep while sitting beside her.

Lying there, Prachi is thinking of leaving the house the next day.

On the other hand, Rhea is making Shayna leave and tells her that Prachi will leave in the morning.

In the meantime, Pallavi is thinking about Prachi and how to stop her from leaving and comes to the conclusion that Rhea will have to leave the house to stop Prachi.

Meanwhile, Aryan drags Shahana out of Prachi's room and tells her to not be a spoilsport between Prachi and Ranbir.

Elsewhere, Alia berates Rhea for treating her friend badly while Shayna comes back and apologises to Rhea and assures her that she will never say any mean thing to her.

Rhea tells Alia to keep Shayana in her room as Ranbir will sleep in her room.

Rhea goes to Prachi’s room and asks Ranbir to come to her room as she is his wife.

Ranbir tells Rhea that he only considers Prachi his wife and not her and he wants to be with Prachi.

Ranbir also talks about the night when he was drunk and asked Rhea to go away but according to her, she got pregnant that night.

Rhea tells Ranbir she is the one who loves him while Prachi is leaving him again in the morning.

Ranbir is shocked to hear the news but tells Rhea that if this is Prachi’s last night then let him spend it with her.

He also tells her that he will not let Prachi leave him and shuts the door in her face.

Prachi who was awake the whole time shuts her eyes and pretends to sleep.

Meanwhile, Rhea is acting like a mad woman and breaking things in her room when Alia and Shayana come to her and are shocked to see her condition.

Rhea tells them that Ranbir has refused her and in her anger decides to kill the child.