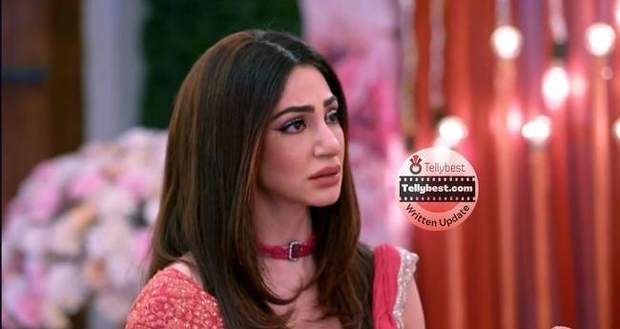 Today's Kumkum Bhagya 3rd January 2023 episode starts with Prachi and Ranbir staring at each other with love filled eyes as they finally get reunited with each other.

Prachi says that she needs to tell Ranbir something as that seems to be the right moment for her.

Ranbir asks Prachi to say what she wants to which Prachi says that she is lucky to have him in her life.

Ranbir tells Prachi that God is granting her wishes while Prachi confesses that she is happy for getting Ranbir back.

Ranbir and Prachi share a beautiful hug together while Ranbir teases Prachi with his taunts.

As Ranbir walks away, Rhea comes out and tells Prachi that she will not remain happy after snatching away her happiness.

Rhea says that Ranbir is not a property which becomes Prachi’s after placing her nameplate on him.

Prachi agrees with Rhea and tells her that Ranbir is that diamond that God placed in her fate but she got late to reach that.

Rhea replies that she does not consider Ranbir and Prachi’s marriage valid as Ranbir only belongs to her.

Meanwhile, the doctor hands over the DNA reports to Pallavi and others as Alia continues to worry about what she can do.

Dida takes the reports and assures Pallavi that everything will be clear that day regarding what the truth is.

Alia drives the car while Dida sits at the front and Pallavi-Vikram sits in the backseat.

At the same time, Sahana and Sid take care of Mihika and ask her how she is feeling now.

Mihika says that she is fine now as she has reached home while Sid says that he could not have saved Mihika without Ranbir’s help.

Aryan tells them that Pallavi, Dida, and others have returned and they go outside asking Mihika to rest inside the room.

After everyone gathers in the living room, Pallavi announces that if anyone wants to say anything to her regarding the truth, then they should do it before the reports are opened.

Once the reports are revealed, Pallavi will not listen to anybody’s excuses and will teach them a lesson that they will remember for life.

Pallavi takes out the reports and they fall to the floor in front of Ranbir giving him the chance to see them first.

Ranbir gets silent while Prachi looks at the report with shocked eyes.

Rhea announces that she is pregnant with Ranbir’s child according to the reports.

A flashback shows Alia changing the reports in the car while coming back without anyone noticing.

Prachi says that Rhea is not pregnant as she saw her eating papaya and did a deep tissue massage.

Rhea asks Pallavi if she will not do anything for Rhea’s child and their rights.

Rhea swears about her child and says that her baby will be born dead if she is lying to everyone.

Suddenly, the doctor enters the house and says that no one will die as Rhea is not pregnant with any child.