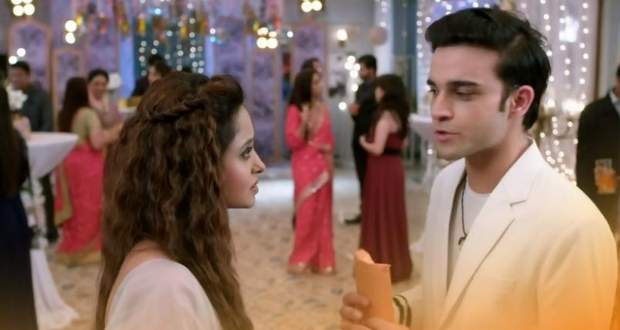 Prachi gives Ranbir the cold shoulder and walks away from him when he asks her why she is angry with him.

However, Prachi stops midway and begins to tell Ranbir about her feelings but realizes that he has left from there.

Rhea follows Ranbir into his room but finds him in the washroom changing before she can talk with him.

While arranging Ranbir’s coat, Rhea finds the ring Ranbir selected for Prachi there and thinks it is for her.

Beaming with happiness, Rhea shares this news with Alia and hugs her with excitement.

The divorce lawyer calls Ranbir and tells him that the divorce papers are ready and are being sent to him by Stanley.

Ranbir comes at the right moment and receives the phone call by himself.

On asking Prachi why she was touching his phone, Prachi tells Ranbir that she has no interest in his personal life.

Prachi bumps into Sahana on her way who tries to cheer her up on seeing her upset face.

Prachi explains to Sahana that she does not want a grand party for her anniversary and tells her about her and Ranbir’s first-anniversary celebration.

Flashback starts with Ranbir taking Prachi to the terrace with her eyes closed.

Prachi gets surprised to see the decorated rooftop and thanks Ranbir for the beautiful setup.

Although both Prachi and Ranbir did not have any money to buy things, their love was enough to make them happy.

Ranbir and Prachi dance together under the starlight and share precious moments of love with each other.

The neighbors also join Ranbir and Prachi in their “pastry” cutting and share the sweetness of their love together.

Prachi tells Sahana that that day was the most beautiful day in her life that she can never forget.

Ranbir overhears Prachi’s conversation and promises Prachi in his heart that he will bring back those days soon after divorcing Rhea.